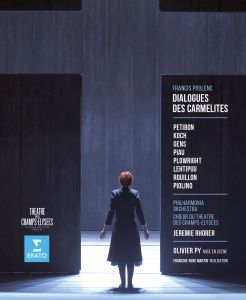 taken as a whole, this is visually by far the best recent Carmelites. It also has a dream cast...Petibon masterfully conveys the complexities of her contradictory character...Piau is a wonderfully... — BBC Music Magazine, March 2015, 5 out of 5 stars More…

At the end of 2013, the year that marked the 50th anniversary of Francis Poulenc’s death, his gripping and moving operatic masterpiece, Dialogues des Carmélites was staged in Paris by director Olivier Py with a cast featuring some of France’s finest female singers – Patricia Petitbon, Véronique Gens, Sandrine Piau and Sophie Koch – under the baton of Jérémie Rohrer. Le Figaro described the production as “a thing of wonder,” while Le Monde called it: “A masterpiece ... the most exciting and consummately achieved show to have been seen on a Parisian stage in a long time … This was great work, magisterial and unforgettable.”

“The memorable Dialogues des Carmélites at the Théâtre des Champs-Elysées marked the climax of commemorative activities for the 50th anniversary of Poulenc’s death,” wrote Opera magazine of the production of Poulenc’s gripping and moving opera that was staged by the French director Olivier Py in Paris in December 2013.

Among operas composed in the post-War era, Dialogues des Carmélites, first seen in 1957 at La Scala, is one of the most frequently performed and best loved. Set during the French Revolution, it tells the story of a highly-strung young aristocrat, Blanche de la Force, who seeks peace by joining a convent and finally goes to the guillotine with her fellow nuns. Faith, fear, and sacrifice are among the issues it addresses with music – sometimes austere, sometimes sensuous, sometimes both at once – that exemplifies Poulenc’s characteristic amalgam of simplicity and sophistication. Its final scene, as the nuns go one by one to their execution while singing a soaring ‘Salve regina’, is of spine-tingling pathos and power.

The stark, monochrome decor for Py’s production, designed by André Weitz, makes use of sliding panels that open and close to create the acting space or reveal expressionist vistas, while the costumes evoke the first half of the 20th century rather than the era of the Revolution itself. Especially striking is the death scene of Madame de Croissy, the old Prioress, searingly sung and acted by the British mezzo-soprano Rosalind Plowright: the audience views her agonies as if from above, since her bed is mounted vertically on the rear panel of the stage. Later in the opera, when it comes to the final night in their convent, before their expulsion by the revolutionaries, the nuns are assembled as if for the Last Supper, while the stunning, transcendent final scene is set against a starry sky.

Languages: Sung in French, with subtitles available in English and German

taken as a whole, this is visually by far the best recent Carmelites. It also has a dream cast...Petibon masterfully conveys the complexities of her contradictory character...Piau is a wonderfully bright-eyed as Constance, Rosalind Plowright is suitably disturbing in the alternate 'mad scene'..With Jérémie Rhorer's nuanced conducting, the Philharmonia on top form and sympathetic filming, there are no weaknesses.

Gens is a lean, nervous (rather than benelovent) Madame Lidoine...Koch's strong presence puts a particularly sharp point on the severity of Carmelite life...Plowright maintains great vocal and dramatic tension...Ultimately, the production and performances take the opera beyond the nuns' story but question the moral responsibility of martyrdom.

Breathtakingly conducted by Jérémie Rohrer, it boasts one of the finest casts ever assembled for the piece. Patricia Petibon gives the performance of a lifetime as Blanche...[Plowright's] performance has a dramatic veracity that is disturbing in the extreme...Long sceptical about the piece, I was completely won over – the highest complement I can pay it.

this film of a production staged in Paris in 2013 has the immediate advantage of a wonderfully responsive conductor in Jérémie Rhorer and a largely Francophone cast...Py’s abstract staging is refreshingly straightforward...overall this is a performance charged with all the opera’s doom-laden dramatic urgency and spiritual power.