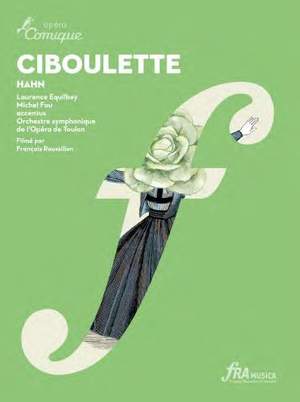 Admittedly the plot is inconsequential and improbably to a degree...Best to concentrate on the music, which is almost always charming and regularly inventive...The cast is nigh-on impeccable,... — BBC Music Magazine, January 2015, 4 out of 5 stars More…

Filmed at the Opéra Comique, February 2013

Intended to set the spice of Parisian operetta against American musical comedy, 'Ciboulette' was Reynaldo Hahn’s first light score. It features the tribulations of the pretty market gardener Ciboulette, determined to earn herself a bright future without sacrificing her feelings. Her pursuit of happiness leads her to come across a whole collection of typical characters from the Paris of the Belle Epoque, from the humblest to the most distinguished.

2 discs DVD including a 32-page booklet.

Admittedly the plot is inconsequential and improbably to a degree...Best to concentrate on the music, which is almost always charming and regularly inventive...The cast is nigh-on impeccable, with tenor Julien Behr offering plenty of juvenile lead panache...and Julie Fuchs an authentic star in the title role.

Julie Fuchs and Julien Behr sing with an artless simplicity perfectly suited to the music. Fuchs is a find: a notable successor to the likes of Géori Boué and Mady Mesple, with a good sense of comic timing. The scenery and costumes are deilghtful.

Michael Fau [stage director] has created a scintillating mise-en-scène, allowing all the crazy events to unfold with precise blocking but also with the sheer sparkle that is the essential ingredient if Ciboulette is to work its magic…The attractive choristers sing and act with the requisite gusto, and the orchestra balances fizziness with lyricism under the expert direction of Laurence Equilbey.

a delicious and graceful operetta set during France’s Belle Epoque. The production is sensible and colourful and Julie Fuchs’s sweetly nimble singing as the market-gardening heroine could warm even the heart of Scrooge.