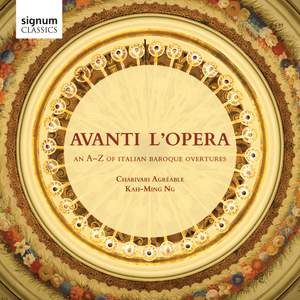 Early-music pioneers Charivari Agréable perform an engaging collection of overtures from Italian Baroque Opera, best described by Kah-Ming Ng as being “lucidly crafted for the purpose of turning heads”. In a decadent era when the antics of theatre-goers were often as intriguing as the performances taking place on stage, these works were composed with the express intention of thrilling, beguiling and engaging an often hard-to-impress audience.

An inspired piece of programming...played by Charivari Agreable...with a disarming naturalness and elegance.