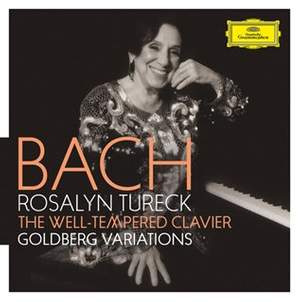 At the age of 15 Tureck was already performing all-Bach recitals, by the age of 16 she was a well-studied Bach performer with knowledge and experience of the harpsichord, clavichord and organ, as well as the piano.

She herself wrote: “Just before my 17th birthday I had an experience which changed my whole life.” While studying again Bach’s material, she lost consciousness and later reports: “I don’t know, how long it was, but when I came to, I had a whole new insight into Bach’s music. I suddenly understood … that a totally new performance technique had to be created to fit this concept of form and its detailed structures…..”

In the year following this revelation, she learned and relearned all of the “Well-Tempered Clavier”. “And the year after, I studied the Goldberg Variations for the first time… and they became central to my life ever since.”

The Well-Tempered Clavier (1952 – 53; 4 CDs) – “Tureck shapes Bach’s lines with architectural specificity ... like the aural equivalent of three-dimensional chess ... Anyone who cares about Bach’s keyboard music should hear these landmark recordings” (International Record Review)

The 1998 Goldberg Variations(1998; 2 CDs) – "a valedictory performance, her final recording before her death in 2003. “Every note is played as if the culmination of a lifetime’s consideration.” (BBC Music Magazine).