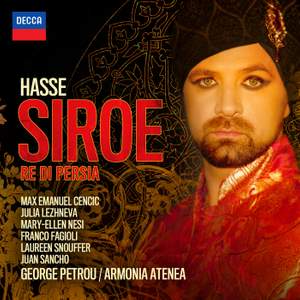 a triumph. It reveals the full splendour of Hasse's score, from tender lyricism to eye-popping virtuosity...Petrou storms his way through the score, pushing the artists beyond what seems physically... — BBC Music Magazine, February 2015, 5 out of 5 stars More…

The world-premiere recording of Siroe re di Persia by Johann Adolf Hasse, whose music encapsulates the refined aristocratic cultural tastes of the European Ancien Régime. Offering true musical fireworks and delights, Siroe is led by Max Cencic in the title role with the vital orchestra of Armonia Atenea and their high-powered conductor, George Petrou: the same vibrant partnership which saw their first album on Decca, Handel’s Alessandro, win a clutch of top awards. Renowned for his gifts as a melodist, in Siroe Hasse offers a feast of rare vocal delights in the telling of a vivid story of passion, jealousy and intrigue.

Remarkably famous during his lifetime, the composer Hasse was acclaimed by his contemporaries as one of the most important artists of the 18th Century: the greatest singers of the time clamoured to perform in his operas.

Max Cencic & Parnassus Arts’ new stage production of Siroe premiered in June 2014 at Athens’ Megaron to enthusiastic acclaim from audience and critics alike, and will tour to Versailles and Vienna.

a triumph. It reveals the full splendour of Hasse's score, from tender lyricism to eye-popping virtuosity...Petrou storms his way through the score, pushing the artists beyond what seems physically possible. Cencic and Fagioli clearly relish the challenge, as does Lezhneva...Cencic eventually eclipess the rest of the cast, conveying Siroe's virtue with fierce bravura. Virtuosic also is the playing of Armonia Atenea.

Petrou achieves an elusive dichotomy of orchestral delicacy and theatrical pace. Reams of recitatives crackle with dramatic conviction...Cencic's impassioned performance of Siroe's first aria...indicates how much Hasse's style influenced the 'Classical' generation...Fagioli is aptly cast as Siroe's evil little brother...Parnassus Productions earns kudos for its adventurous ambition to record a complete Hasse opera to such a high standard.

Max Emanuel Cencic’s Siroe conveys both manly strength and vulnerability, his ringing upper register giving his performance a genuinely heroic character. I’m not convinced that Medarse is Franco Fagioli’s most successful role, since, although the technique is as formidable as we have come to expect, there is an element of excess in his portrayal of Siroe’s treacherous brother.

one of the finest recordings of the year...the entire recording crackles with the energy of a staged performance...Cencic radiates nobility and stoicism, whilst Franco Fagioli chews the scenery in the very best sense of the phrase...but Lezhneva pretty much steals the show...Siroe truly deserves to be ‘praised to the skies’, as Metastasio once declared with glee – as do Armonia Atenea and all concerned with this breathtaking recording.

the cast seems unfazed by the technical challenges, though there’s rather more bravura than refinement...the soprano Julia Lezhneva shows that it is possible to negotiate Hasse’s vocal writing with stylishness and beauty of tone as well as accuracy.