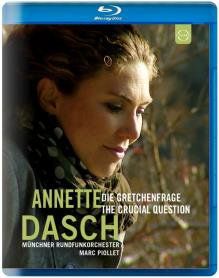 Annette Dasch started her fulminant career as a winner of prestigious international singing competitions and is nowadays one of the most sought-after singers.

In 2011, an extraordinary concert of the star soprano took place. Based on "The crucial question",Annette Dasch dedicated the programme to mythical female characters in desperate crisis situations,with works by Schubert, Berlioz and Schumann.

Including the portrait of the singer “That is why music is the most important thing”, a film by AnnetteSchreier. This portrait follows Annette Dasch in her time in Bayreuth, Geneva, Munich and Berlin,during rehearsals, in performances, and in preparations of her show “Annettes DaschSalon”