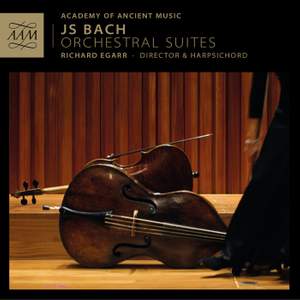 [Egarr] has given careful thought to articulation and phrasing. Menuets and Gavottes are poised and unhurried while the Overtures themselves, with their resplendent opening measures and lively... — BBC Music Magazine, March 2015, 4 out of 5 stars More…

Towards the end of its 40th anniversary year the Academy of Ancient Music, with its musical director Richard Egarr, releases a significant new recording of JS Bach’s four Orchestral Suites BWV1066-69.

This new recording was made at low pitch (A=392) along with a reduced orchestra.

Using one player per part creates a wonderful chamber music feel and allows the flexibility that is essential in Bach’s music.” (Richard Egarr).

Further content available online includes an introductory film about the recording as well as session photographs.

This release – the third on AAM Records – follows ‘Birth of the symphony: Handel to Haydn’, which was named BBC Radio 3's Disc of the Week and widely acclaimed, and JS Bach’s ‘St John Passion’, which received a 2014 Gramophone Award nomination in the vocal category.

[Egarr] has given careful thought to articulation and phrasing. Menuets and Gavottes are poised and unhurried while the Overtures themselves, with their resplendent opening measures and lively fugal discourses, sparkle with amiability...This is an engaging release, in which currently fashionable sound-barrier-breaking tempos are mercifully absent.

he presents the Bach Suites as elevated chamber music...What I like about Egarr is the way middle voices are liberated and integrated into the overall texture, while the fugal ouvertures breeze along without the dubious benefit of rocket fuel...All in all, a feast of meaningfully understated musicianship. I loved it.