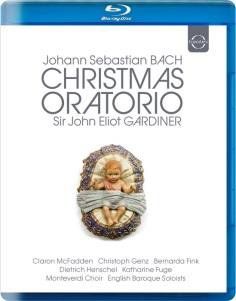 In the historic Weimar Herder Church, Sir John Eliot Gardiner finds the perfect setting for his recording of the Bach Christmas Oratorio.

Against the backdrop of the dramatic altar and Lucas Granach paintings, the Monteverdi Choir and the English Baroque Soloists perform Gardiner's new interpretation of this classic piece.

For the renowned conductor, this Weimar concert is a special performance, marking the start of his Bach Cantata Pilgrimage.

With this interpretation of the Christmas Oratorio, Gardiner shows himself once again to be an incontestible specialist of Bach's music.

- 'J S Bach: Jauchzet, frohlocket! An Introduction to the Christmas Oratorio', presenting the best performers in their field, including John Eliot Gardiner, the Monteverdi Choir founded by him, the English Baroque Soloists, as well as other internationally-known vocal soloists.

- 'Bach revisited - J E Gardiner in Saxony and Thuringia', in which the British conductor has set his mind on performing all of Johann Sebastian Bach's cantatas. Several of these concerts take place in Saxony and Thuringia, where Bach lived. This offers Gardiner the opportunity to discover Bach, his life and work in his own, very personal way.