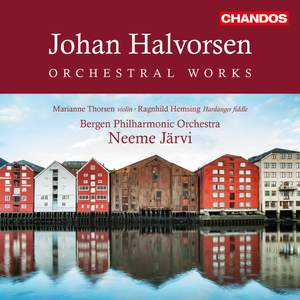 I. Peik, the Princess and the Giant Troll

III. The Princess Riding on the Bear

IV. Entry of the Trolls into the Blue Mountain

V. Dance of the Little Trolls

Neeme Järvi and the Bergen Philharmonic Orchestra have lifted the lid on one of Norway’s best-kept musical secrets with their series devoted to the orchestral works of Johan Halvorsen. Now, in this four-disc box set, these fresh and revealing recordings have been brought together for the first time.

Johan Halvorsen was among the most prominent Norwegian musical figures of his day, not only as one of the leading composers of his generation but also as a violinist and conductor. His compositions develop the national romantic tradition of his friends Grieg and Svendsen, but his was a distinctive style marked by brilliant orchestration which in turn was inspired by the French romantic composers.

Many of the works in the series reflect Halvorsen’s long association with the theatre. The varied fruits of this career produced such scores as Fossegrimen, the neoclassical Suite ancienne, the exotic Dance Scene from 'Queen Tamara', and his Symphonic Intermezzo from 'The King', a tone poem much indebted to the musical language of Liszt and Wagner.

The series also includes his output in more traditional genres. Halvorsen composed the three great symphonies late in his career, the first only at the age of fifty-nine, and they are strongly in the mould of late romantic composers such as Tchaikovsky, Dvorák and Svendsen.

Among Halvorsen’s many short, stand-alone works are a number of pieces for violin and orchestra, which reflect Halvorsen’s own abilities on the instrument, while drawing on nationalist influences. The leading Norwegian violinist Marianne Thorsen is the soloist.