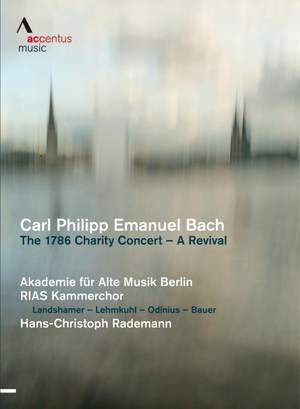 In 1786 Carl Philipp Emanuel Bach presented the greatest musical achievements of his century to a captivated audience and enthusiastic reviewers. The music director from Hamburg arranged a remarkable program for a charity concert, including not only his own music, but also popular and forgotten works by his father J. S. Bach and works by George Frideric Handel. As a tribute to the 300th anniversary of C. P. E. Bach the RIAS Kammerchor and the Akademie für Alte Musik in Berlin will revive the memorable concert from April 9, 1786 and reawaken a great historic moment in music history.

Rademann captures the elusive aesthetic of music from the years between the Baroque and Classical styles...The camera work is nicely paced, sometimes musically sensitive, sometimes catching a private smile between desk-partners or a timpanist bouncing in readiness for his entry.