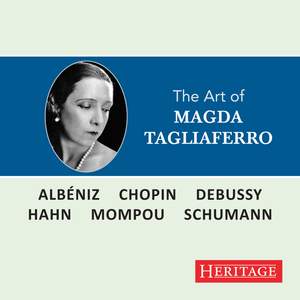 The Art of Magda Tagliaferro

It is difficult to think of a more irrepressible virtuoso pianist than Brazillian born but Paris based Magda Tagliaferro…a pianist who revelled in music of a facile but endearing charm. She is... — International Piano, May/June 2015 More…

It is astonishing that Magda Tagliaferro’s name is unknown to many music-lovers. Rarely has there been a pianist with such style, such buoyant, subtle rhythm and such controlled energy, such swagger and sensuality. These qualities are displayed here in the rare 78rpm recordings she made in the 1930s - the much sought-after Reynaldo Hahn Piano Concerto and performances of her beloved Schumann, Debussy and the music of Spain and South America. The transfers were originally produced by Roger Beardsley for Pearl and the booklet includes an informative and affectionate note by Jeremy Siepmann.

Born in Rio de Janeiro, Brazil, on 19th January 1893, Magda Tagliaferro was of French parentage, and gave her first recital at the age of seven. She was admitted at the age of 13 to the Paris Conservatoire, where she studied piano with Antoine Marmontel and came under the figurative wing of the Conservatoire’s director Gabriel Fauré. When she was only 14 she won the Conservatoire’s top prize for piano, earning the warm enthusiasm of Saint-Saens and Isaac Albeniz. Soon afterwards she caught the attention of Alfred Cortot, who later became her teacher. Her concert schedule took her all over the world, though principally in South America and France, and she was a much sought-after soloist in the pre-war years. As a teacher she was famed, having developed the ‘Tagliaferro Technique’ of playing after experiencing technical difficulties early in her career. She gave her Carnegie Hall debut at the age of 86 and her final recital at the age of 92!

It is difficult to think of a more irrepressible virtuoso pianist than Brazillian born but Paris based Magda Tagliaferro…a pianist who revelled in music of a facile but endearing charm. She is gentle and assuaging in Schumann’s F sharp minor Romance…Chopin’s Fantaisie-Impromptu, too, is given with a truly extraordinary dexterity and rhythmic aplomb.

Her records are relatively scarce and this is a delicious selection of them … The unnamed orchestra is splendid and the recording, good for its time, sounds even more splendid here … The transfers are excellent; good copies were used by Pearl and this disc, in Heritage’s astute and growing selection of reissues, restores this valuable tranche of 78s very enterprisingly.