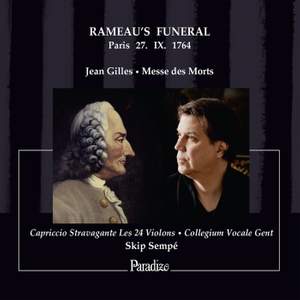 the playing is beautiful, that oboe playing is just so sinuous, and the legato so dramatic and the use of space, phrasing, breathing in between phrases all so, so atmospheric … All in all an... — CD Review, 18th October 2014 More…

Skip Sempé commemorates the 250th anniversary of the death of Rameau, in performances of music heard at his memorial services in 1764. This world premiere recording for his Paradizo label not only includes the ‘1764 Rameau’s Funeral’ version of Gilles’ 'Messe des morts' but also music from 'Castor et Pollux', 'Dardanus' and 'Zoroastre'.

Jean Gilles composed the most famous French Requiem of the Ancien Régime. This 'Messe des morts' was performed throughout the 18th century at the funerals of Gilles in 1705, Campra in 1744, Royer in 1756, Rameau in 1764 and Louis XV in 1774. Nearly 60 years after its initial performance, an arrangement of the 'Messe des morts', probably by François Rebel and François Francoeur and their Concert Spirituel entourage, was prepared for Rameau’s memorial service at the Oratoire du Louvre on 27 September 1764. Rebel and Francoeur ‘updated’ the Messe des morts for the 1760s by changing the instrumentation, incorporating musical references in Rameau’s honour and adding movements to the work.

For this project, Paradizo and Skip Sempé have combined two ensembles from long traditions of excellence: the legendary Collegium Vocale Gent, founded by Philippe Herreweghe, and Capriccio Stravagante Les 24 Violons, possessed of the most opulent orchestral sound for French Baroque music in the world today. The vocal soloists are Judith van Wanroij, Robert Getchell, Juan Sancho and Lisandro Abadie. This program will be performed ‘on site’ at the Oratoire du Louvre in Paris on 17 and 18 September 2014 in Paris, inaugurating the Terpsichore 2014 concert series.

the playing is beautiful, that oboe playing is just so sinuous, and the legato so dramatic and the use of space, phrasing, breathing in between phrases all so, so atmospheric … All in all an unusual but highly effective way of marking Rameau’s anniversary.

there is…enormous strength in the music and it is undeniably affecting … both groups are impeccably stylish and as accomplished as ever … this disc is certainly a highlight of Rameau’s anniversary year … Rameau enthusiasts should relish this disc.