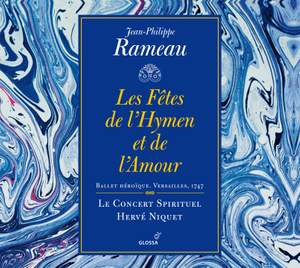 The music, with Rameau very much in his prime, matches the spectacle and drama...While Herve Niquet's musical direction is generally and excellently consistent, this performance is by no means... — BBC Music Magazine, February 2015, More…

The latest in Hervé Niquet's 'reinvigorations' of French operatic music from the Baroque and beyond for Glossa is Rameau’s 1747 'Les Fêtes de l’Hymen et de l’Amour'. A ballet heroïque in a prologue and three entrées, the whole work was designed to comprise a complete theatrical spectacle. Music for dancing – as befits a ballet – is given a prominent role and Rameau is able to create especially expressive symphonies and to give the choruses – even a double-chorus – an integral role in the action. Added to this are supernatural effects, and plots for the entrées which explored the then uncommon world of Egyptian mythology (including a musical depiction of the flooding of the River Nile). In his vocal music Rameau deftly switches between Italianate style and the French mode, current in the mid-18th century, allowing the distinguished team of vocal soloists to demonstrate their accomplished talents. Overseen by the Centre de musique baroque de Versailles, and with booklet notes from Thomas Soury, this new recording is an important addition to the Rameau catalogue – the more so in the 250th anniversary year of the composer’s death. It brings to life one of Rameau’s finer, if underrated, compositions, and a dramatic work written on the cusp of important reforms in opera.

The music, with Rameau very much in his prime, matches the spectacle and drama...While Herve Niquet's musical direction is generally and excellently consistent, this performance is by no means perfect...But the recorded sound is good and this rarity certainly repays attention.

the performances are so, so fresh and so present.

The singing is buoyant, the playing of Le Concert Spirituel under Hervé Niquet affectionate and uplifting – one of the more imaginative tributes for the composer’s 350th anniversary year.

The solo writing ranges from recitative to da capo arias; the delightful orchestration includes independent bassoon parts. Apart from a backward harpsichord continuo, the recording is excellent. And, oh yes, so are the singing and playing.

[Santon's] gleaming tone and smoothly flowing emission are rewardingly dulcifying...[Vidal] produces a clean, focused sound, lightish when singing A Pleasure in the Prologue and tonally fuller as Arueris...[Chrystoyannis's] baritone brings a different colour and range from what has gone before...Niquet appears to strike sensible tempos.

In addition to many splendid dance movements, there are a number of fine airs and ariettes scattered through the piece, their quality here enhanced by the outstanding singing of Reinoud Van Mechelen, now firmly established as one of the most mellifluous and technically accomplished of today's haute-contre.

The story is sophisticated light entertainment. The music, however, is first-rate and stylishly performed by Niquet, his solo team and the band’s players and chorus.

Few ensembles do French baroque as well as Le Concert Spirituel with their conductor Hervé Niquet. There’s a real understanding here of the innate sexiness of this music. The orchestral and choral sound is wonderfully rich without ever turning pompous.

There is some superb singing here, particularly from soprano Chantal Santon-Jeffery, high tenors Mathias Vidal and Reinoud Van Mechelen, and bass Tassis Christoyannis...Le Concert Spirituel does an outstanding job with the sumptuous score and its beguiling stream of song, speech and dance.