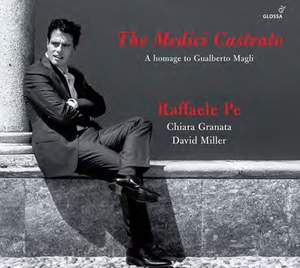 A homage to Gualberto Magli

The exciting countertenor voice of Italian Raffaele Pe which has, in the last few years, been captivating audiences at concert and opera performances given by the likes of John Eliot Gardiner, Claudio Cavina, Christophe Coin and Paul McCreesh, is now provided with a CD release from Glossa of Pe’s solo recital, 'The Medici Castrato'. Pe takes his lead from music written for Gualberto Magli, a castrato at the court of the Medicis in Florence in the first quarter of the 17th century who, through the encouragement of his teacher Giulio Caccini, became a master of the new vocal form of monody. Magli’s prowess led him to be sought after for the Mantuan première of Monteverdi’s 'L’Orfeo', sizeable portions of which are sung here by Pe. Alongside a modern homage to castrati such as Gualberto Magli written by Alessandro Ciccolini and seicento composers such as Francesca and Giulio Caccini and Sigismondo d’India appear monodies by more shadowy names such as Girolamo Montesardo and Johann Nauwach (compositions by the latter resulting from Magli working for the Elector of Brandenburg). The 17th century instrumental soundworld is conjured up on this recording (previously only available as a download) by harpist Chiara Granata and theorbo player David Miller.

Pe is a persuasive advocate of what can be (and what possibly always was) intellectually demanding music ... a fascinating issue.

Pe has a bright, lucid timbre that cuts often to the heart of things, confidence and athleticism in the high resgiter, and a hint of sweetness lower down...a special feature of the recital is the contribution of the two continuo players, who establish themselves as equal players throughout, and whose contribution can be savoured on its own terms.

“Pe has a well-focused counter tenor voice, expressive but not at all florid. With a fine approach to phrasing comes an agile way with decorations … The church acoustic is very pleasing. Even in the welter of counter tenor discs, Pe’s precisely targeted concept album rewards close listening.