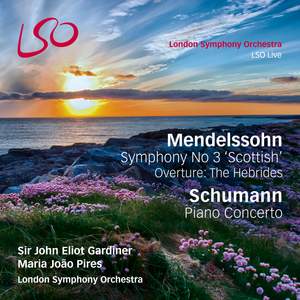 [Pires] has the enviable ability to make everything sound fresh but natural, and her tone is enchanting...The definition on [the Blu-ray] is superb and the camera work actually helps the viewer... — BBC Music Magazine, February 2015, 3 out of 5 stars/5 out of 5 stars More…

James listens to John Eliot Gardiner and the LSO's new disc of Mendelssohn and Schumann, with pianist Maria João Pires.

LSO Live presents the first in a series exploring the complete symphonies of Felix Mendelssohn under the baton of Sir John Eliot Gardiner. Also featured on this release is the eminent Portuguese pianist, Maria João Pires, in the inaugural concerto recording on the label.

Inspired by his travels to the British Isles and full of the influence of the rolling Scottish landscape, both Mendelssohn’s Symphony No. 3 ‘Scottish’ and his Hebrides Overture (‘Fingal’s Cave’) are amongst the composer’s most popular and celebrated works.

Sir John Eliot Gardiner writes of this coupling: "Even if they spoke with different accents these genial Romantics were united in their ambitious fervour for ‘abstract’ music to be acknowledged as having the same expressive force as poetry, drama or the literary novel. The three works on this album exemplify the endeavour and range of invention of two of them, friends and colleagues in Leipzig."

This recording will be released in both SACD and pure audio Blu-ray formats, allowing both the London Symphony Orchestra and Sir John Eliot’s performance to be seen and heard to full effect.

"This was the London Symphony Orchestra; but, with violins and violas standing and with a new suppleness and brilliance in their voice, they sounded Romantic and revolutionary. There was a brisk stepping-out, a bracing scent of the tangle o’ the isles, and tiny, drawn-back moments to glimpse the Romantic sublime." The Times****

"The opening of the Intermezzo was supremely graceful with Pires and the LSO’s cellos creating a chamber music intimacy in the ensuing dialogue. The cultivated way in which Pires and the LSO took up and finished phrases was masterful. The finale was a whirling dance with Pires really revving up the momentum while at the same time bringing out the fanciful elements in the score. The coda was played with gusto, bringing the piece to a sparkling conclusion." Seen and Heard

[Pires] has the enviable ability to make everything sound fresh but natural, and her tone is enchanting...The definition on [the Blu-ray] is superb and the camera work actually helps the viewer understand the music.

Gardiner's Hebrides Overture must be one of the most thrilling ever recorded, adding volleys of sea-spray to well-navigated execution...Ebb and flow is of the essence in this proto-Wagnerian masterpiece and a subtle use of vibrato...Gardiner makes a beeline for individual instrumental details, keeping important woodwind lines to the fore.

this ‘Scottish’ symphony is fresh, vital and even thrilling (a word that doesn’t always come up in discussions of Mendelssohn) as any I’ve ever heard…at its best it is so good that it can be recommended without hesitation.

a reading formed by life experience…Pires is supported by conductor and orchestra magnificently...I’ve never heard so much of the orchestral colour and detail in any other Schumann recording … My anticipation that this might be a special recording has been met.

As you would expect from the LSO brass section, the trumpets soar and blaze when appropriate, but it’s really the woodwind who excel [in The Hebrides]...Pires seems to focus on lyricism over drama, and that’s no bad thing [in the concerto]...It’s in [the Scottish] symphony that Gardiner’s credentials as a proponent of so-called historically-informed performance are most evident

one of the finest performances of Schumann's Piano Concerto that I have ever heard...[Pires's] performance is as pristine and common-sensical as it is soulful and beguilingly expressive. The whole thing is absolutely wonderful, and an education.