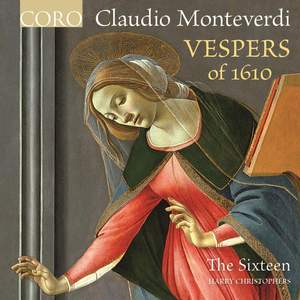 Christophers sees Monteverdi attempting here to 'speak through singing'...and this, he tells us, allows the conductor 'the most amazing licence' - of accentuation, speed and declamation. Hence... — BBC Music Magazine, January 2015, More…

Harry Christophers writes: ‘Monteverdi’s Vespers of 1610 is quite simply one of the greatest works of sacred music ever written and without doubt the most varied and inspired before Handel and Bach began composing their oratorios and passions. Where it was written, why it was written and who it was written for are actually immaterial – suffice it to say it was quite simply his calling card for the big job, Choirmaster at the resplendent Basilica of St Mark in Venice. Its variety alone makes it unique – thrilling psalm settings with virtuosic writing for both multi-part choir and instrumentalists to exotic and sensual settings of texts from the Song of Songs for solo voices. Every movement is full of luscious harmonies, drama and an evocative musical language which is so beautifully constructed for all concerned.’

Christophers sees Monteverdi attempting here to 'speak through singing'...and this, he tells us, allows the conductor 'the most amazing licence' - of accentuation, speed and declamation. Hence the character accounts of Laudate pueri and Dixit Dominus, where pauses are ignored or inserted and the relative speeds between their duple and triple sections are rarely the same.

Exemplary all-round standards are the draw here, whether solo voices, choir or instruments.

The Sixteen has a directness and, certainly in this recording, a muscularity in approach that are very appealing…Christophers shapes every phrase beautifully and is always alive to Monteverdi's rhetoric…[this performance] gives a sense of how shockingly modern Monteverdi's Vespers must have seemed to those used to Palestrina and the like. For a work with which we are now so familiar, that is no small achievement.

This is surely one of the most refined versions of the Vespers currently available...not a note is out of place