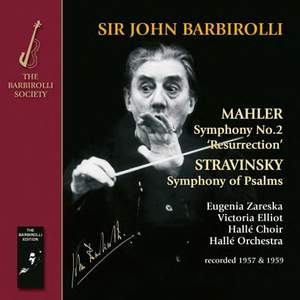 Barbirolli and his Hallé forces make an excellent job of the finale. The recording is somewhat stretched by some of the loudest passages – the opening being one such case – but on the other hand... — MusicWeb International, 10th October 2014 More…

By the time of his death, Sir John Barbirolli had conducted all the Mahler symphonies except the Eighth “Symphony of a Thousand”, and the reconstructed Tenth. He conducted the two completed movements of the Tenth (the Adagio and Purgatorio). Recordings are available for Nos. 1,2, 3, 4, 5, 6, 7 and 9.

He conducted the Adagietto of the Fifth on several occasions, the first of these being in New York. He performed the song-cycle Kindertotenlieder, with Elena Gerhardt at the Royal Philharmonic Society concert on 29 January 1931. He conducted it in Manchester in 1946 and several times later with Kathleen Ferrier (see the Barbirolli Society release SJB1080).

In 1959 he decided to prepare the Ninth Symphony and the acclaim for his interpretation inaugurated 16 years of almost an obsession with Mahler.

We are fortunate that this thrilling performance, recorded on 12 March 1959 in the Free Trade Hall, with Victoria Elliot and Eugenia Zareska as soloists and the Hallé Orchestra and Choir, is now available for the first time. Probably few people think of Barbirolli as a Stravinsky interpreter, but he regularly programmed a handful of works and did them impressively. The rhythms and colours of the Firebird and Petrushka ballets evoked some exciting performances. He gave excellent accounts of the Symphony in Three Movements and the more classic Symphony in C. The Symphony of Psalms was a favourite too if there was enough rehearsal time to do justice to the great work. It obviously had been well prepared for performance on the evidence of this disc taken from a broadcast from the Edinburgh Festival on 28 August 1957.

The choir had to travel overnight from Manchester and arrived at Prince’s Street Station at 5am on a miserable cold and wet morning. Their spirits lifted when they saw the familiar figure, with his large hat and carrying his stick, waiting to greet them.

As can be heard on this disc, he gives the music a reverential quality but does not indulge in any exaggerated religiosity. Typically, he probes the score for every ounce of lyricism without compromising the music’s baroque style.

Barbirolli and his Hallé forces make an excellent job of the finale. The recording is somewhat stretched by some of the loudest passages – the opening being one such case – but on the other hand the offstage effects are very well managed and the incandescent ending is sonically well conveyed...admirers of this great conductor will surely want to hear them.