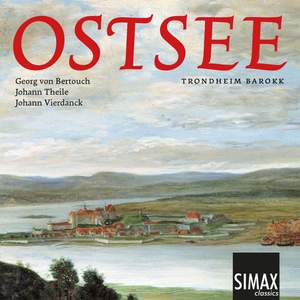 Stylish performances reveal barely-known Baroque music from the Baltic Hanseatic capitals. While some is workaday and rambling, much is imaginative. — BBC Music Magazine, Christmas 2014, 4 out of 5 stars More…

Bertouch: Sonata 13 in C minor for two violins and continuo

Bertouch: Sonata 10 in A minor for two violins and continuo

The 17th and 18th century composers Johann Vierdanck, Johann Theile and Georg von Bertouch all received their musical training in Saxony, spending large parts of their professional lives based around the Baltic Sea. The music of these significant but rarely heard composers is performed on this CD by the specialist period instrument ensemble Trondheim Barokk.

Georg von Bertouch (1668-1743) was a contemporary of J.S. Bach and was well established as a composer around that time. Bertouch's cantatas are the works of a young man and based on traditional form, whilst his sonatas on the other hand were composed towards the end of his life when new trends and developments had crystallised into what is usually called the late Baroque style. Johann Vierdanck (1605-46), began his career as a singer in the Hofkapelle of the Elector of Saxony in Dresden where the great German composer Heinrich Schütz encouraged his early attempts at writing music. Later he moved to Stralsund, spending the final ten years of his life as organist of the Marienkirche. Johann Theile (1646-1724) lived in Lübeck for much of his working life, counting among his friends the composers Dietrich Buxtehude and Johann Adam Reincken. He became Kapellmeister to the court of Duke Christian Albrecht at Gottorf.

Under the guidance of major musical figures like Andrew Parrott and Sigiswald Kuijken Trondheim Barokk have developed into one of the most accomplished early music groups on the international music scene. Soprano Ingeborg Dalheim is a member of Les Arts Florissans, whilst Marianne Beate Kielland performs regularly with conductors like Jordi Savall and Fabio Biondi. Bass Njål Sparbo has won several major awards including the Kirsten Flagstad Prize.

Stylish performances reveal barely-known Baroque music from the Baltic Hanseatic capitals. While some is workaday and rambling, much is imaginative.

it's certainly not difficult to appreciate the gentle charms of their repertoire. Church cantatas bustle with melody and colour, enriched by chamber organ continuo and a superb trio of soloists...This disc has a quiet appeal that only grows with better acquaintance.