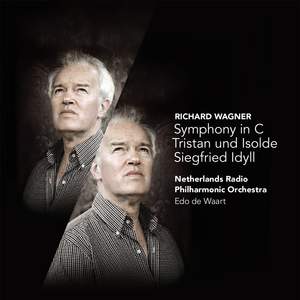 Conductor Edo de Waart is renowned for his interpretation of the works of Richard Wagner and this release from Challenge Classics presents him conducting Wagner’s music. On this disc he is heard directing the Netherlands Radio Philharmonic Orchestra in three pieces, the early Symphony in C, the Nachtgesang and the Liebestod from his opera Tristan und Isolde in an orchestral arrangement by the composer Henk de Vlieger and the Siegfried

Richard Wagner was just 19 when in the summer of 1832 he wrote his Symphony in C. The work itself clearly shows the influence of his compatriot and predecessor Ludwig van Beethoven. Nowhere in Wagner's compositions are dramatic elements so integrated into the music as in Tristan und Isolde, a work that is at the same time the most symphonic of his operas. It was written between 1857 and 1859, and is notable for Wagner's unprecedented use of chromaticism, tonality, and orchestral colour. The Siegfried Idyll was composed in 1870 and performed as a surprise birthday present for Wagner’s wife Cosima on Christmas day that year. Although the musical themes of the piece are largely borrowed from Wagner’s dramatic opera Siegfried, the third part of “The Ring”, the Siegfried Idyll is one of his most elegiac works, written as a public declaration of his love for the woman who a year and a half before had given birth to their son, also called Siegfried.

Edo de Waart is Chief Conductor of the Royal Flemish Philharmonic, Music Director of the Milwaukee Symphony Orchestra and Conductor Laureate of the Netherlands Radio Philharmonic Orchestra. As an opera conductor, de Waart has enjoyed major success in a large and varied repertoire in many of the world's greatest opera houses. The Netherlands Radio Philharmonic Orchestra was founded in 1945 and since then has been led by many of the world’s most renowned conductors including Bernard Haitink, Jean Fournet, Willem van Otterloo, Hans Vonk, Sergiu Comissiona, Jaap van Zweden, and Edo de Waart. The current incumbent Markus Stenz was appointed chief conductor in 2012.