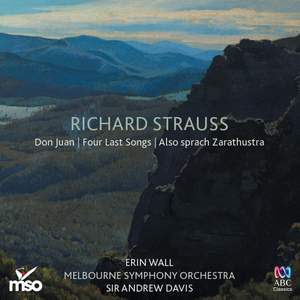 The centrepiece is a beautifully modulated, sensitively and sensuously soaring interpretation of the Four Last Songs by Erin Wall. Here, too, Davis reveals his understanding of the Straussian... — Gramophone Magazine, November 2014 More…

Erin Wall delivers a truly radiant account of Strauss' Four Last Songs with an atmosphere of quiet rapture rather than melancholy. She's an exciting young soprano with repertoire encompassing Mozart's Donna Anna through to most recently Strauss' Arabella for the Metropolitan Opera. Wall's voice is a glorious instrument - free, full, creamy and rich toned, with musicianship and control in abundance. With Andrew Davis' mastery of the Straussian ebb and flow, together they deliver a sublime performance where her voice, at times, almost merges with the orchestral textures (especially in Im Abendrot), the MSO responding superbly to Strauss' delicate orchestrations, under the maestro's baton.

This is the first release in a Sir Andrew Davis Strauss cycle for ABC Classics and it has been released to coincide with the MSO's European tour in August 2014. Sir Andrew takes the listener on a journey on a journey through the ardour and heroics of the world's greatest lover as imagined in Strauss' Don Juan, a delightful Four Last Songs with the amazing soprano Erin Wall, the artists working hand-in-glove. Rounding off this first offering the awe-inspiring Also sprach Zarathustra, a work of massive scope, consummately performed here by orchestra and conductor.

The orchestra is performing this repertoire at the 2014 BBC Proms in London, and the Edinburgh Festival, and already has created quite a buzz. Erin Wall is incredible in the Four Last Songs ...she has a warmth in her voice reminiscent of Margaret Price. It's also

amazing to reflect that back in the mid-1970s Andrew Davis recorded four Last Songs with a then little heard of and relatively unknown Kiri te Kanawa ... and this CBS Strauss recording was the start of her stratospheric trajectory as a soprano ... will history repeat itself? Davis has worked extensively with Erin on the opera stage, and most recently (April/May 2014) she has undertaken Arabella at the Metropolitan opera. Her voice is ideal in this repertoire, an interpretation which has an atmosphere of restrained rapture rather than melancholy, which is refreshing to hear.

The centrepiece is a beautifully modulated, sensitively and sensuously soaring interpretation of the Four Last Songs by Erin Wall. Here, too, Davis reveals his understanding of the Straussian orchestral fabric with a judiciously balanced spectrum of timbres.