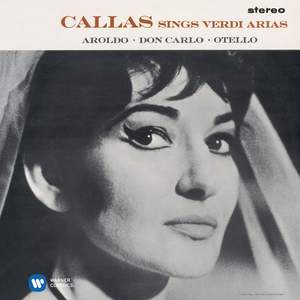 Only one of the roles represented in this Verdi recital figured in Callas’s stage repertoire: Elisabetta in Don Carlo, which she performed at La Scala in 1954. From the same opera she also sings Eboli’s mezzo-soprano showpiece “O don fatale”, a feature of her recitals in the early 1960s. An adventurous choice are Mina’s arias from the rarely-heard Aroldo (Verdi’s reworking of Stiffelio): ‘The vivid pronunciation of the words, the burning emotion conveyed by tone-colour, and the powerful and eloquent sense of rhythm, are all memorable. So is the fearless quality of Callas’s singing,’ said

Gramophone. When it came to Desdemona’s scene from Act IV of Otello, the critic wrote: ‘Verdi’s music is brought to life as by no other artist. Her voice is in fine state: very beautiful, and drawing a full glorious line.’