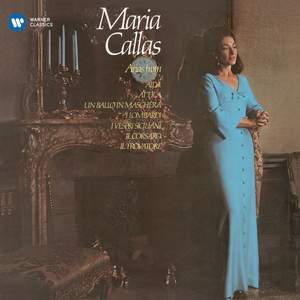 This third Verdi collection was the last recital that Callas recorded, over an extended period between 1964 and 1969. Arias from operas in her stage repertoire – Aida, Un ballo in maschera, I vespri siciliani and Il trovatore – were complemented by numbers from more rarelyheard works from Verdi’s ‘galley years’: When five of the tracks from this recital were originally released as Callas by Request, Gramophone admired the way: ‘Callas revealed her matchless command of line, verbal declamation and musical insight.’