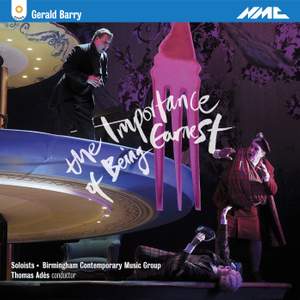 Offer, Barry, G: The Importance of Being Earnest

Surely this is not only the best operatic treatment of Oscar Wilde since Salome, but also one of the few absolutely essential operas of the last 20 years...This performances features at least... — BBC Music Magazine, January 2015, 5 out of 5 stars More…

Act I: Did you hear what I was playing? (Algernon, Lane, Jack, Choir)

Act I: Miss Fairfax, ever since I met you (Jack, Gwendolen)

Act I: I feel bound to tell you (Lady Bracknell, Jack)

Act I: Are your parents living? (Lady Bracknell, Jack)

Act I: What should I do? (Jack, Lady Bracknell)

Act I: What should I do? (reprise) (Jack, Lady Bracknell)

Act I: Will you stop!! (Jack, Algernon, Lane, Gwendolen)

Act II: You are my little cousin Cecily (Algernon, Cecily)

Act II: Cecily, ever since I looked (Algernon, Cecily, Merriman)

Act II: You must not laugh at me (Cecily, Algernon)

Act II: I had no idea (Gwendolen, Cecily, Jack, Algernon)

Act II: And this is what you call Bunburying!? (Jack, Algernon)

Act III: But where did you deposit the handbag? (Jack, Miss Prism, Gwendolen)

Act III: What do you think this means (Chasuble, Lady Bracknell)

This release was made possible thanks to the generosity of trusts, foundations and individuals who donated to our 2013 Opera Appeal, the other two releases being Judith Weir's The Vanishing Bridegroom and Harrison Birtwistle's Gawain.

The Importance of Being Earnest was jointly commissioned by the LA Philharmonic and the Barbican in London, and received its world premiere staging at Opéra national de Lorraine à Nancy in 2013.

Two further productions were staged the same year at the Royal Opera House Linbury Theatre, and on tour with NI Opera.

The Importance of Being Earnest received a 2013 RPS Award for Large-Scale Composition.

‘The world now has something rare: a new genuinely comic opera and maybe the most inventive Oscar Wilde opera since Richard Strauss's Salome more than a century ago.’

The Los Angeles Times Gerald Barry's riotous opera brings out the savagery beneath the genteel Edwardian manners of Wilde's play: its score includes gunshots, whistling and speaking from the orchestral players, marching boots, and the smashing of 40 dinner plates, while its characters – among them Lady Bracknell sung by a bass and Cecily by a stratospheric soprano – shout at each other through gales, quote Schiller's Ode to Joy (in German) and make polite conversation through megaphones.

'It’s all completely bonkers, but I went in grumping and came out grinning. What more can you ask?' The Telegraph

Surely this is not only the best operatic treatment of Oscar Wilde since Salome, but also one of the few absolutely essential operas of the last 20 years...This performances features at least three ideal incarnations: Barbara Hannigan's cut-glass Cecily, Peter Tantsits's spot-on Jack and Hilary Summers's true-contralto Miss Prism, who hits every note asked of her.

Barry magnifies the fizzing quality into a relentlessly high-wire act that has the audience relishing the stamina of the performers, here under the needle-sharp control of ringmaster-in-chief Thomas Ades.

In the Barbican, the sheer size of the hall seemed to dilute the impact of Barry’s fabulously inventive score, with its machine-gun delivery of great swathes of text, ricocheting instrumental lines, and surreal references...On disc, all those can be enjoyed, the sheer virtuosity with which Barry puts it all together appreciated

The mind boggles as to how any singer can manage to memorise and execute Barry’s fiendish vocal parts, but Adès’ cast more than rises to the challenge. It’s a true ensemble effort, though if pushed to pick a stand-out performance, the pyrotechnics of soprano Barbara Hannigan as Cecily are pretty unbeatable.

Alan Ewing and especially Barbara Hannigan (in plate-smashingly good form) are superb, and conductor Thomas Adès keeps everything moving along at a cracking pace. Buy it for your handbag.