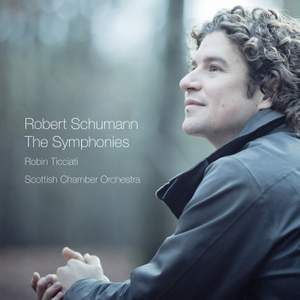 The first thing to be said about this Schumann cycle is how splendidly alert the orchestral playing is: the Scottish Chamber Orchestra must be one of the finest ensembles of its kind in the world... — BBC Music Magazine, November 2014, 5 out of 5 stars More…

David talks to the Scottish Chamber Orchestra's young conductor about his complete set of Schumann symphonies, out on Monday on Linn Records.

‘Schumann: The Symphonies’ sees Robin Ticciati and the Scottish Chamber Orchestra embark upon their first symphonic cycle together in a programme that they performed in concerts across Scotland.

This is music that is very close to Robin Ticciati’s heart; he describes Schumann as one of his favourite composers and has often spoken about how important poetry, colour and story are to Schumann’s music.

Symphony No. 1 'Spring', blazes and sparkles with joy, Symphony No. 2 finds its way carefully through to the safe haven of its final movement, the much-loved Symphony No. 3 ‘Rhenish’ moves with huge ease and assurance to a resonant and joyful conclusion.

Symphony No. 4 is radical in the way each movement attacks the start of the next movement with barely a pause, and in its minute-and-a-half-long, shimmering and horn-call-filled transition to the finale. Under Ticciati and the SCO it is magnificent, the radical, soaring, disturbing and exhilarating symphony Schumann intended.

The SCO’s smaller forces bring a lightness of touch and a clarity to the counterpoint; under Ticciati they achieve a sense of movement that no previous recording has.

Robin Ticciati’s recordings have received many accolades: Critics' Choice 'Sound of 2012' (The Independent), 'Classical CD of the Week' (Sunday Times), 'Disc of the Week' (BBC Radio 3 'CD Review'), No. 3 in The Sunday Times’ Best Classical Albums of 2012 list and ‘Recording of the Month’ (Gramophone).

In October 2014 Robin Ticciati will enter his sixth season as Principal Conductor of the Scottish Chamber Orchestra. He began his tenure as Music Director of Glyndebourne Festival Opera in May 2014.

Gramophone named Robin one of the top ten young ‘conductors on the verge of greatness’ and one of 'Tomorrow's Icons' by Gramophone.

2014 is the Scottish Chamber Orchestra’s fortieth anniversary year and ‘Schumann: The Symphonies’ its twenty second recording with Linn.

The first thing to be said about this Schumann cycle is how splendidly alert the orchestral playing is: the Scottish Chamber Orchestra must be one of the finest ensembles of its kind in the world today. Its principal conductor, Robin Ticciati, is very much on his toes, too, paying meticulous attention to detail throughout.

Ticciati clearly knows how he wants this music to go and his strong parnership with the Edinburgh players enables him to shape readings notable for their energy and individuality...Throughout the performances are characterised by a woodwind sweetness that is becoming a trademark of this orchestra.

Ticciati adopts near-ideal tempi, refusing to drag in the slow movements — and he is propulsive in Schumann’s energetic, animated allegros. The wind soloists throughout effortlessly take centre stage, but the splendidly swaggering horns, especially in the Rhenish and D minor works, deserve special mention.

perhaps the most impressive thing that Ticciati has done on disc so far. Every bar in these urgent performances with the Scottish Chamber Orchestra seems alive and full of interest...in each symphony there is the sense of careful consideration and total absorption in the music so that not a detail of Schumann’s scoring goes missing. Everything flows with total naturalness.

The music-making on this splendid album gives abundant evidence of a happy marriage: you don’t get playing this focused and vigorous if everyone’s in a bad mood...There is lilting flow here, too, plus delicate textures, from the winds especially: all ingredients in performances that make you experience the symphonies’ wonders afresh.

Ticciati joins the distinguished list of today’s conductors treating Schumann’s Symphonies with the respect they deserve. At times he includes a few personal notions but each of them throws light on the passage in question.

Ticciati's new recording with the Scottish Chamber Orchestra of Schumann's four symphonies hits the mark… The lightness and buoyancy that are so much a feature of these masterpieces can be heard right across the stunning, super-articulate SCO performances.