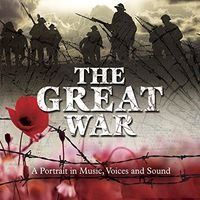 The Great War - A Portrait in Music, Voices & Sound

‘The Great War’ is a landmark 100th anniversary collection quite unlike any other - a unique blend of music, poetry, sound reportage and documentary evoking “the war to end all wars” as it was fought and lived by the British people - a powerful and moving tribute to the sacrifice of millions.

Captured here are the sounds of Britain at a pivotal moment in her history - the songs that the soldiers sang on the march and in the trenches, from “It's a Long Way to Tipperary” to “I Want To Go Home”... recruiting tunes, comic ditties and sweetheart songs from the music halls and theatres... and the reflections of all ranks as they faced apocalyptic shell fire and the horrors of the barbed wire. Original landmark recordings from 1914-18 mingle with readings, reminiscences and sequences from the works of Elgar and Delius to create a panoramic portrait that's poignant, gripping and atmospheric in equal measure.

With special features including the whole of the 1961 radio documentary “The Long, Long Trail” that inspired the stage show ‘Oh What a Lovely War’, ‘The Great War’ is a truly historic collection full of breathtaking moments.