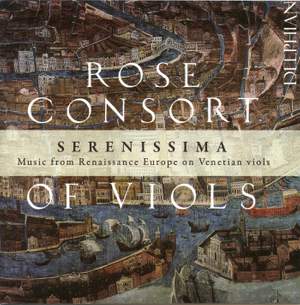 The Rose Consort of Viols, already acclaimed for their recordings of later English repertoire, have been inspired by viol-maker Richard Jones’ reconstructions of a Venetian instrument by Francesco Linarol – the earliest viol surviving from the 16th century – and trace a path from the viol’s northern Italian origins to England, where it found a particularly welcome home at the turn of the 1600s.

The Rose Consort of Viols takes its name from the celebrated family of viol-makers, whose work spanned the growth and flowering of the English consort repertory. The Consort performs extensively throughout the UK and Europe, appears regularly on the BBC and in the major London concert halls, and has also featured at festivals in Canada and the USA. It has received awards for its research and performance of newly devised programmes and has made a number of highly acclaimed recordings, including 'An Emerald in a Work of Gold', their most recent CD for Delphian, featuring music by Byrd and his contemporaries in collaboration with The Marian Consort.

This musical kaleidoscope turns through dark hued reflections and light-filled reveries...Technically, the Rose Consort is well-nigh flawless, and these restrained, refined readings, informed by a deep understanding of the viol and its repertoire, evoke the finesse and grace of the celebrated Renaissance courts.

[an] exceptional and ground breaking recording … I was held in thrall by the whole recording … [a] very significant project, a daring concept, brilliantly successful. This is an absolute must for viol players, of course, but it will also speak strongly to people to whom all this background is less important that the experience of listening to beautiful music, marvellously played.

The Rose Consort of Viols offer lively and resonant but always intimate and understated interpretations, executed with precision and piquancy.

In regard to repertoire and instruments this is a most interesting disc. Those are reasons enough to urge any lover of consort music to add this recording to his collection. Another good reason is the playing of the Rose Consort of Viols. They produce a beautiful sound…This is a very valuable collection of Renaissance instrumental music.

this music is heard far too rarely, and some of it is quite extraordinary … Delphian have done a fine job in recording the plangent timbre of the viol consort … A treasure chest of Renaissance riches!