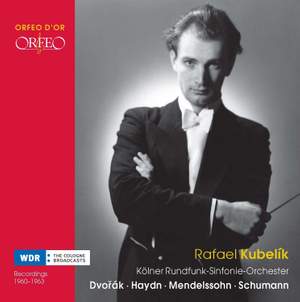 Every one of these performances is marked by Kubelik’s direct but sensitive approach to music-making and there’s a great deal to enjoy here … The interesting notes by Rob Cowan are full of infectious... — International Record Review, December 2014 More…

Rafael Kubelík’s reputation as one of the most significant conductors of the 20th century rests not just on his work with the great orchestras of Berlin, Chicago or Munich (the latter of which are represented on Orfeo) but also of recordings he made with Cologne Radio Symphony Orchestra (today the WDR Symphony Orchestra Cologne). The earliest of the WDR archive recordings published here is of Dvorák’s Piano Concerto: a work that he performed at the first Prague Spring Festival in 1946, with the same soloist as on this recording, Rudolf Firkušný. The passionate lyricism of Firkušný’s playing and the intensity of the orchestral accompaniment under Kubelík achieve such mastery that these two artists are regarded as exemplary to this day in thsi work. The same is true of Kubelík’s interpretations of Robert Schumann which are considered definitive. Kubelík’s masterly sense of structure is also apparent in his recordings of Mendelssohn, a composer with whom Kubelík is seldom associated, though these performances lack for nothing in their flexibility of tempi and dynamics. And to close with, Orfeo offer recordings of two of Haydn’s London Symphonies: No. 101 'The Clock' and No. 102. Questions of authentic performance practice recede when one hears Kubelík perform Haydn with such playfulness, such verve in the fast movements and such unsentimental composure in the slow movements. Like all the other treasures offered here from the WDR archives, they cast new light on the work of this conductor whose 100th birthday was on 29 June 2014.

Every one of these performances is marked by Kubelik’s direct but sensitive approach to music-making and there’s a great deal to enjoy here … The interesting notes by Rob Cowan are full of infectious enthusiasm as well as plenty of information.

The orchestra’s sonority remains warm throughout the various choirs, but there’s no lack of momentum when required…The re-mastering has been accomplished most sympathetically, and Orfeo’s latest release to celebrate Kubelík’s art can itself be very warmly commended.