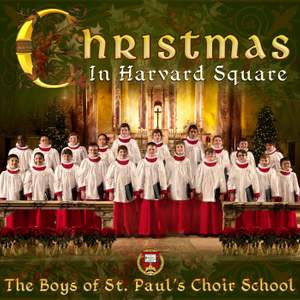 John Robinson, Anonymous: I Sing Of A Maiden

trad.: A maiden most gentle

trad.: Angels We Have Heard

trad.: There is no Rose

For their first official release, The Boys of St. Paul’s Choir School bring us a great combination of traditional and modern arrangements for classic songs for the holidays. The Boys of St. Paul's Choir School have just celebrated their 50th anniversary in existence. This was marked by a journey to Rome in February 2014 where they performed for Pope Francis in St. Peter’s Square.

Christmas in Harvard Square is their first official record release.

The academy has been described not as a school with a choir, but as a choir with a school. The Musical director/choirmaster John Robinson is from the UK and has a background in the London choir schools.

The album has a good combination of classic songs for the holidays, both traditional and modern arrangements (by Robinson himself) and includes five Rutter/Willcocks songs.