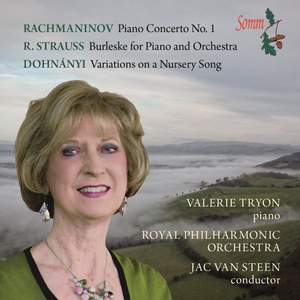 This new release offers a unique coupling, unavailable on any other label, of three of the most significant virtuoso works for solo piano and orchestra written during the 25 years 1889-1914 in thrilling performances by Valerie Tryon, one of this country’s greatest pianists, who celebrates her 80th birthday this year. Richard Strauss’s ‘Burleske’, the earliest work in this collection, is like a one-movement Romantic piano concerto – the only one he wrote – and Rachmaninov’s First Concerto came just two years later in 1891 and was written when he was only 18! But he later revised it, in 1917, and that is the version that is always played today. The first movement cadenza is the same in both versions, and it gives one a good idea of what a wonderful pianist Rachmaninov was at that age when you hear it. Valerie Tryon’s performance of these two eminently youthful works is spell-bindingly good, as is her playing of the ‘Variations on a Nursery Tune’ by the Hungarian composer Dohnanyi – an older friend of Bartok – a work that used to be done every year at the Proms and has the funniest real joke in classical music. The orchestra begins the work as though it is a tragic and dramatic masterpiece, after which the piano comes in with ‘Twinkle, twinkle, little star’ – the tune on which the variations are based. It’s more than a fun piece and this performance tingles with life, thanks to splendid support by the Royal Philharmonic Orchestra conducted by Jac Van Steen.

Tryon's second disc for Somm once more distils her very recognisable virtues. Whether in Rachmaninov, Richard Strauss or Dohnanyi, her articulation remains clear and precise, her approach lyrical and expressive rather than overtly brilliant...Tryon creates her own distinctive musical ambience.