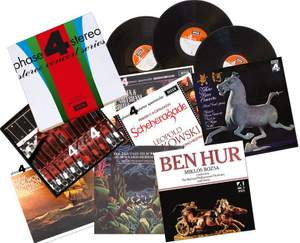 Herrmann, B: Journey to the Centre of the Earth

Herrmann, B: The Seventh Voyage of Sinbad

Herrmann, B: The Day the Earth Stood Still

• INCEPTION: ‘Phase 4 stereo’ was created in 1961 as an American subsidiary of Decca, and steered to success by New Yorker Tony D’Amato. 200 classical releases were eventually released within this label, with the first major classical releases 50 years ago in 1964.

• IMMEDIACY OF SOUND & A WIDE SOUND SPECTRUM: Using Decca’s 20-channel mixing desk, the label aimed to deliver an immediacy of sound which new recording and the LP techniques permitted, and thus give listeners an experience they would not obtain anywhere else either in the concert hall or from other labels. Phase 4 vividly expanded the scope and spectrum of recorded sound. See the YouTube video for details.

• THE TECHNOLOGY: A 4 track, 20 channel console mixer built especially by Decca. Each channel (recorded independently) of the console had equalisation and reverb/echo (electronic or chamber), and each channel was assignable to any of the 4 tracks of an Ampex tape recorder. For the early to mid-sixties this was state-of-the-art.

• The collection includes no less than 11 discs featuring works which are first international CD releases - see below for listing.

• Phase 4 stepped into the classical arena in 1964 with the launch of the ‘concert series’, releasing over 200 albums in the series. Drawn largely from the concert series, this set shows Phase 4 in its prime – big classical works requiring large scale orchestras, ripe for the display of spectacular sound engineering feats. Big classical symphonies sit alongside major piano and violin concertos. Popular ballet titles such as Carmen, Swan Lake, Spartacus are also here.

• Film / Movie scores include Rózsa’s Music from Ben Hur, Music from the Great Hitchcock Movie Thrillers and Bernard Herrmann’s Journey to the Centre of the Earth.

• There are also big band specials, light classics from Arthur Fielder and Ketèlbey, Stokowski’s brilliant orchestral transcriptions and music which grabbed headlines back in the day – such as the Yellow River Concerto (first international CD release), probably the world’s most popular piece of Chinese-originated orchestral music.

• A BONUS CD in this set is Bob Sharples Battle Stereo. It took one year to produce, and required assistance from London’s crop of engineers to funnel all ten tape tracks down to the final two with the British Grenadier Guards and Her Majesty’s Horse Guards providing the soundtrack to what could be a motion picture about war.

• As well as its distinctive sound, Phase 4 was known for its range of loyal and charismatic artists. The included:

• The legendary Leopold Stokowski (star of Disney’s Fantasia) made several Phase 4 recordings, dating from the final years of his long and brilliant career and capturing his unique magic.

• Phase 4 stalwart Stanley Black, who excelled in every field imaginable from Latin-American to theatre, film and to classical.

• Antal Doráti who conducted the best-selling Peter and the Wolf, featuring Sean Connery as narrator.

• Academy Award-winner Bernard Herrmann, whose score of Journey to the Centre of the Earth had a lasting impact across Hollywood.