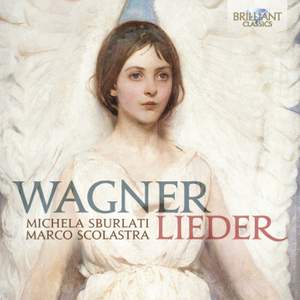 No. 3. Im Treibhaus (In the Hothouse)

No. 6. Gretchen am Spinnrade

The Wagner year 2013 brought us a wealth of new and re‐issues of his greatest operas, therefore this new recording of his songs might be seen as an elegant and refreshing “encore”: small‐scale Lieder, of an intimate nature, but often expressing in just a few minutes as much as in a whole opera scene.

Included are the famous Wesendonck Lieder, in the original German version and in an Italian translation by Boito (Verdi’s librettist), Gretchen am Spinnrade, Mignonne and several other little gems.

Includes extensive liner notes on the works and performer biographies.