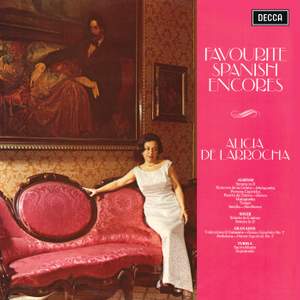 de Larrocha at her finest: this LP-and-a-half's worth of Albeniz, Granados, Falla, Soler and other captures this music's idiomatic heart, with ebullient rhythms, soulful melodies and exquisite... — BBC Music Magazine, Christmas 2014, 5 out of 5 stars More…

Although she disliked being typecast as a Spanish music specialist, there’s no doubt that Alicia de Larrocha’s way with this music is in a class by itself. No matter what the repertoire for a recital she gave, regardless of whether it included Spanish music, she was often called upon by her audiences to provide at least one Spanish encore. Over her performing lifetime she built up many of these and in 1974 made a recording of thirteen of them entitled ‘Spanish Piano Music’ (SXL 6734: tracks 1–13 on this reissue). This LP forms the core of this reissue and is filled out with other encore-worthy Spanish titles. While Albéniz (with six pieces) and Granados (with four) form the core of the reissue, there’s also zesty Spanish Baroque music by Mateo Albéniz (no relation of Isaac) and Antonio Soler, two dances from Falla ballet music despatched with disarming ease by Larrocha in their keyboard versions, and miniatures by Halffter, Nin-Culmell and Montsalvatge.

de Larrocha at her finest: this LP-and-a-half's worth of Albeniz, Granados, Falla, Soler and other captures this music's idiomatic heart, with ebullient rhythms, soulful melodies and exquisite tonal warmth.

Each track is excellently recorded, and Miss de Larrocha does everything possible for these little pieces, from the piquant sub-Scarlatti of Matéo Albéniz and Soler to the items by Isaac Albéniz and Granados ... This music is mainly an evocation of dance and song, and the vividness and clarity, light and warmth are everywhere apparent