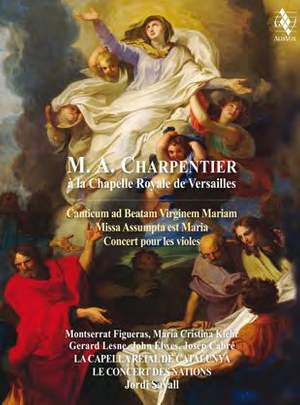 Marc-Antoine Charpentier at the Royal Chapel in Versailles

Rarely have I seen and heard such a beautifully performed collection of French baroque vocal and instrumental works … Savall directs all from the dessus de viole effortlessly. — Choir & Organ, Autumn 2014 More…

To celebrate the 25th anniversary of the foundation of Le Concert des Nations by Montserrat Figueras and myself in 1989, we are now delighted to be able to release on the Alia Vox label an SACD version of Charpentier’s 'Canticum ad Beatam Virginem Mariam' in what was the ensemble’s first recording. This re-release is accompanied by a DVD of the recording of the concert given on 9th October, 2004, at the Royal Chapel at Versailles, and a second SACD featuring the live recording of 'Missa Assumpta est Maria' at that concert, as well as the instrumental interlude 'Nuit' taken from the 'Pastorale In nativitatem Domini canticum' and the new recording of the 'Concert pour quatre parties de Violes' at the collegiate church of Cardona on 7th May, 2013.

This is also an opportunity for us to pay homage to one of the greatest musicians of his generation on the occasion of the 310th anniversary of his death. Let us not forget that, together with Purcell in England, Charpentier brought about the transition from modality to tonality, enriching his works with poignant chromaticism, false relations and dissonances, which more often than not arose from that very conflict between tonality and modality. Thus, the genius of Charpentier retains its relevance and eloquence today, thanks to his highly individual way of incorporating certain transalpine influences into the French tradition; all this, together with his profound spirituality, makes his music a perfect example of the “goûts réunis.” JORDI SAVALL, Seoul, 29th April, 2014

Rarely have I seen and heard such a beautifully performed collection of French baroque vocal and instrumental works … Savall directs all from the dessus de viole effortlessly.

If you don’t have any of the repertoire on your shelves this is an attractive way to acquire it…all the music is top drawer Charpentier with his rich harmony and lively counter-point.

A treasure map is needed to find one's way through this release. The CDs and DVD...contain performances of some of the most beautifully created, deeply spiritual music Charpentier ever wrote...The performances are all carefully honed and representative of Savall's wider approach to historical music, which is to create versions possibly even more beautiful than originally envisaged.

there is a beautifully persuasive way with the strings that shows a seemingly innate understanding of how the lilt of French Baroque works, and that spreads across both discs as a tribute to the outstanding nature of Savall’s musicianship...as a tour of Charpentier’s considerable achievement for both court and church, this set is excellent.

The music is unfailingly, gorgeously expressive…The main work in the later recital is the richly scored final Mass setting.