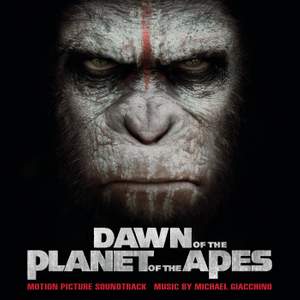 Giacchino: Dawn of the Planet of the Apes OST

Giacchino: Past Their Primates

Giacchino: Monkey to the City

Giacchino: The Lost City of Chimpanzee

Giacchino: The Apes of Wrath

Giacchino: How Bonobo Can You Go

Giacchino: Planet of the End Credits

Griffith Giacchino: Ain't That a Stinger

A growing nation of genetically evolved apes led by Caesar is threatened by a band of human survivors of the devastating virus unleashed a decade earlier. They reach a fragile peace, but it proves short-lived, as both sides are brought to the brink of a war that will determine who will emerge as Earth's dominant species.

The original soundtrack to this epic blockbuster is composed by Michael Giacchino, known for his prolific scores to films, television series and video games.

Giacchino’s most notable works include the scores to ‘Lost’, ‘Call of Duty’, ‘Mission Impossible III’, ‘The Incredibles’, ‘Star Trek’, ‘Ratatouille’, ‘Up’ and many more. He has received numerous awards for his work, including an Emmy, multiple Grammys, a Golden Globe and an Academy Award.