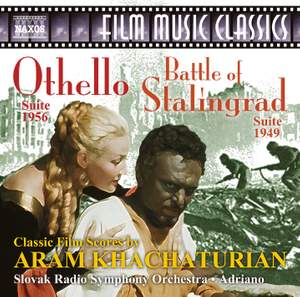 Khachaturian: The battle of Stalingrad

I. A City on the Volga - II. The Invasion

IIIb. The Enemy is doomed

IV. For our Motherland; To the Attack! - Eternal Glory to the Heroes

V. To Victory - VI. There is a Cliff on the Volga

I. Prologue and Introduction

VII. A Fit of Jealousy

IX. The Striking of Desdemona (The Slap)

X. Othello's Farewell from the Camp

Khachaturian’s involvement in film, which began in Armenia as early as 1934, was long-lived and highly distinctive. Until 1960, the date of his last film, he wrote principally for Mosfilm and his scores, not least in subsequent arrangements, earned him considerable renown. His own eight-part concert suite arrangement taken from the epic Battle of Stalingrad (1948–50), is a symphonic fresco of high tension, fully befitting its subject matter. The suite derived from the score for Othello reveals the full canvas of Khachaturian’s cinematic imagination, from glorious love music to darker scenes of despair.

The Slovak Radio Symphony Orchestra is not the most refined orchestra in the world but I find its engagement with the score impressive - their wind and brass at that time retaining enough of a Slavic tang to their tone to give the performances a distinct air of authenticity...the return of this disc deserves a warm welcome both as a sample of the composer's considerable talent and the dedication and skill of conductor Adriano.