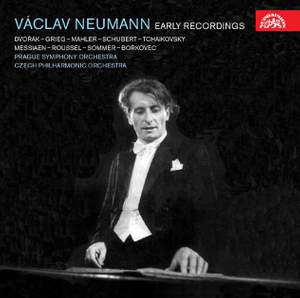 Dvořák: Symphony No. 1 in C minor, B9 'The Bells of Zlonice'

Under his baton, the splendid Prague Symphony Orchestra made the very oldest recordings of Dvořák’s early symphonies (Nos. 1, 2 and 4), a recording of Trojan’s orchestrated version of Tchaikovsky’s The Seasons, while the Czech Philharmonic recorded Mahler’s enchanting song cycles and major international and Czech modern works – by Messiaen (with the composer’s wife Yvonne Loriod on the piano), Bořkovec and Sommer. This selection is symbolically rounded off by Dvořák’s Nocturne, recorded by Neumann with the Czech Philharmonic in 1968, just a few weeks after the invasion of Czechoslovakia by the Warsaw Pact forces. A number of these unique and sensitively remastered recordings are being released on CD for the very first time.