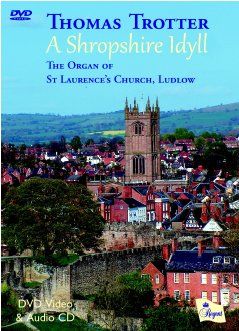 Thomas Trotter, one of the world’s greatest organists, presents a programme of music to mark the 250th anniversary of the organ in St Laurence’s Church, Ludlow – the church where the ashes of A E Housman, writer of A Shropshire Lad, are buried.

A specially-tailored programme to showcase the historic stops by Snetzler, as well as the more recent additions in the 19th and 20th centuries. The performance includes Elgar’s monumental Sonata in G, op 28, and a stunning demonstration of supreme virtuosity in Nyman’s Fourths, Mostly, written for Thomas Trotter. The DVD features a performance video of the programme including footage of the church, Ludlow, and the surrounding countryside, and the music is accompanied by quotations from the works of A E Housman.

In extra features Thomas Trotter talks about the music he performs on the recording, and Shaun Ward, Director of Music at St Laurence’s Church, gives a tour of the organ.

An audio CD of the performance programme is also included.