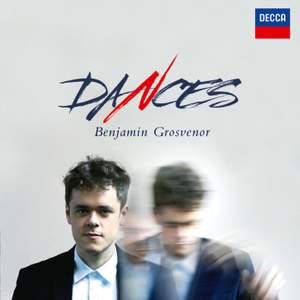 The quality of this playing is altogether exceptional. Pianist Benjamin Grosvenor takes nothing for granted in music. Nor should we in listening to him...he plainly understands that every interpretation... — BBC Music Magazine, October 2014, 5 out of 5 stars More…

No. 6 in C-Sharp Minor (Scherzando)

Schulz-Evler: Arabesques on themes from 'The Beautiful Blue Danube'

Following on from Monday's newsletter, I caught up with Benjamin over email to find out more about his new disc Dances - and whether or not he has two left feet…

Dances is a dazzling display of solo works for piano from Bach to Boogie Woogie; via Chopin, Granados, Albeniz, Scriabin and the Blue Danube.

For his second solo album on Decca, Benjamin Grosvenor has assembled a typically imaginative and appealing programme of piano music inspired by the dance form.

Shining the spotlight on the music of movement, this album was inspired by a letter from the great pianist-composer Ferruccio Busoni to his pupil Egon Petri proposing a “dance programme” as a theme for Petri’s recitals, a concept Grosvenor expanded on for his Queen Elizabeth Hall debut recital in 2012.

A former Gramophone Young Artist of the Year, Grosvenor will appearing at two BBC Proms in 2014 with a performance of Chopin’s First Piano Concerto with the BBC Philharmonic Orchestra (8th August), followed by a solo recital at Cadogan Hall (1st September). In 2011, he was awarded the honour of opening the BBC Proms Concerts season and was the youngest-ever soloist to perform on the ‘First Night’.

The quality of this playing is altogether exceptional. Pianist Benjamin Grosvenor takes nothing for granted in music. Nor should we in listening to him...he plainly understands that every interpretation is just one possibility, and he offers us a very enticing opportunity to open our minds...All in all, a world of piano styles evoked as few could even hope to try.

This is piano playing of nimbleness and elegance.

performances that are carried forwards on an irresistable tide of youthful exuberance...there is a sense of joyful release, of music-making free from all constraint...Grosvenor may well be the most remarkable young pianist of our time...this is a disc to prompt wonder and delight in equal measure.

his playing exudes a buoyance and clarity which really does dance. Everything is consummately classy and eloquent, but nothing is cerebral or micro-managed...Mark my words, this one will be garlanded with awards in the coming months – and, more importantly, will bring countless hours of pleasure.

the delivery is absolutely winning...The discovery is the Valses Poéticos by Granados, done with total charm and dash. Even the trashy Schulz-Evler mash-up of Strauss's Blue Danube is transmuted by Grosvenor into something breathtaking.

The poise of the sarabande is particularly exquisite: Grosvenor at such points seems inside the notes, entirely the music’s servant...This is an exhilarating programme all told, from a greatly gifted young artist. Excellently recorded, too. And even if Grosvenor records the complete fripperies of Schulz-Evler, I know I’ll still be listening.