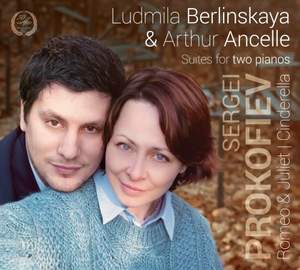 Prokofiev: Cinderella - Suite from the Ballet, Op. 87, for two pianos

Prokofiev: Romeo and Juliet - Suite from the Ballet for two pianos

Firma Melodiya presents recordings of the suites for two pianos from Sergei Prokofiev’s ballets. This album is the first original project of Melodiya for the last twenty years that introduces a new generation of Russian music performers (by virtue of circumstances, Firma Melodiya has been re-releasing the recordings made in the former USSR).

The piano duet of Lyudmila Berlinskaya and Arthur Ancelle was formed in 2011. They have won acclaim of the public and some leading musical periodicals for their concerts and recordings. Lyudmila Berlinskaya is a representative of a renowned musical dynasty, an Honoured Artist of Russia and grand prix winner of prestigious international competitions. Arthur Ancelle was born in Paris to an artistic family and has given concerts in France and overseas since 13. He is a well-known interpreter of 20th century music and an author of piano arrangements of symphonic works by various composers. This album features his piano transcriptions of two fragments from Romeo and Juliet. The transcriptions for two piano fragments from the ballet Cinderella featured on the album were made by the outstanding contemporary pianist Mikhail Pletnyov.