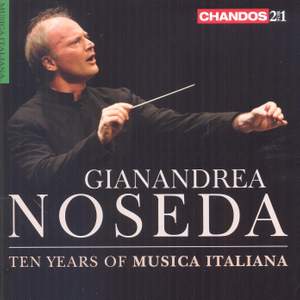 Concerto for Orchestra, Op. 61: I. Sinfonia

Partita for Orchestra: I. Gagliarda

This special ‘2for1’ compilation release celebrates ten years of Gianandrea Noseda’s Musica Italiana series. During this time Noseda has shown a remarkable commitment to championing long forgotten scores by well-known composers as well as the finest works by altogether neglected ones.

On Disc 1 he revives several works long absent from the concert hall. His recordings of the Symphony No. 2, Symphonic Fragments and Concerto for Orchestra excerpted here have brought Casella’s music to a new and passionate audience. Luigi Dallapiccola, a composer very close to Noseda’s heart, is known for his lyrical Italianate take on Schoenberg’s twelve-tone system; three contrasting works are represented here. The Respighi recordings heard here look beyond the tone poems for which he is best known, shining a light on some equally ravishing scores. Disc 2 presents a collection of orchestral movements from the richly romantic Italian operatic repertoire of the nineteenth and early twentieth centuries. Alongside works by the towering masters Verdi and Puccini are less familiar ones by Wolf-Ferrari, Giordano, Ponchielli, and Mascagni. Completing this celebration of Italian music are substantial excerpts from choral works by Goffredo Petrassi, taken from a recording that was widely praised, earning a BBC Music Magazine Award nomination.