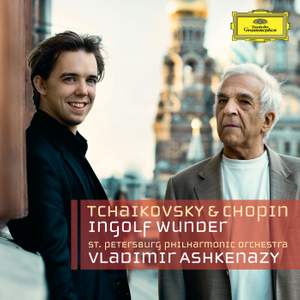 Ashkenazy is very much more than an accomplished and insightful accompanist. He is a fully fledged, generous partner, weaving the variegated orchestral strands into a polyphonic tapestry of timbres...Wunder,... — BBC Music Magazine, September 2014, 5 out of 5 stars More…

Ingolf Wunder presents two of the greatest hits in the repertoire: Chopin's and Tchaikovsky's First Piano Concertos - live from St. Petersburg’s 2012 “White Nights” Festival. Returning to his beloved Chopin, Ingolf Wunder teams up with the supreme musicianship of the St. Petersburg Philharmonic Orchestra under the baton of legendary Vladimir Ashkenazy.

Ingolf Wunder achieved worldwide recognition at the 2010 International Chopin Piano Competition in Warsaw, winning Second Prize and several special awards, and he was an audience-favourite.

Ashkenazy is very much more than an accomplished and insightful accompanist. He is a fully fledged, generous partner, weaving the variegated orchestral strands into a polyphonic tapestry of timbres...Wunder, meanwhile, easily distracts us, when it's appropriate, from the essentially percussive nature of his instrument...Indeed this is one of the most subtly and illuminatingly coloured accounts of this work I've encountered.

Though Ashkenazy and Wunder make entirely empathetic partners, the balance in general favours orchestral detail...[Wunder] plays [the Chopin] superbly - in particular the Romanze and the last movement - and the recorded sound has a ringing clarity and depth.