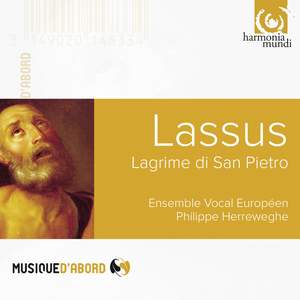 This cycle of 21 spiritual madrigals for seven voices is at once the swansong of the most famous composer of his time, who died in 1594 at the age of 62 just three weeks after dedicating the work to the Pope, and the highpoint of Counter-Reformation polyphony. More than four centuries later, the ‘Tears of St Peter’ still have the power to move. This title was released for the first time in 1994.

The results are enchanting, even spellbinding...it will repay very careful listening.

these become emotional outpourings rather than internal reflection, and Herrewghe varies his forces intelligently across the seven psalms to savour Lassus’s many deft compositional touches.