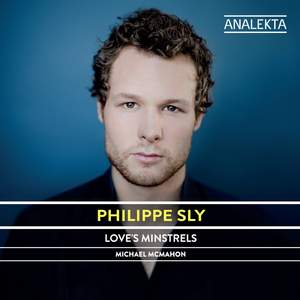 Sly possesses a fine, velvet bass-baritone voice, clear diction and splendid, true intonation...In terms of his handling of dynamics, nuance of language and the poetry he brings to the long melodic... — Gramophone Magazine, Awards Issue 2014 More…

Willan: Drink to Me Only with Thine Eyes

The Bells of San Marie

Fear No More the Heat O’ the Sun

Take, O Take Those Lips Away

Hey, Ho, the Wind and the Rain

Under the ANALEKTA label, charismatic bass-baritone Philippe Sly takes us back to an era, which may not be so distant in time (the end of the 19th century and the beginning of the 20th), but that is light years away from our own century and points of reference. Here is LOVE'S MINISTRELS, the third album for this talented young man with a rich and strong voice. Philippe Sly, with all the sensitivity and intriguing power of his exceptional voice, delivers 21 songs frozen between two eras. He is accompanied on the piano by the amazing Michael McMahon, the partner of choice for some of the best Canadian singers.

The album brings together five composers whose works praise the legacy of the sometimes near, sometimes distant past. These works passionately bring to mind bucolic England, when British and Western history is making its way into a thriving new world.

These are the works of Ralph Vaughan William (1872-1958), based on poems by Dante Gabriel Rossetti (1828- 1882), a six-poem cycle; three ballads by John Ireland (1879-1953), based on the writings of John Masefield (1878-1967), poems that exalt the beauty of the landscapes and the dramatic lives of sailors. There are also five poems by William Shakespeare (1564-1616), set to music by Roger Quilter (1877-1953), a composer whose songs are largely inspired by England's well-known musical heritage; as well as four songs by the British composer who emigrated to Canada, Healey Willan (1880-1968), based on well-known poems, including one of the most often cited poems in English literature, Drink to me only with thine eyes. Also on the program, three songs that have evolved in the incantatory and contemplative sphere of Vedic hymns, a tradition that goes back to the 15th century B.C., works by Gustav Holst (1874-1934).

At the turn of the 20th century, in England especially, the pre-industrial era laid the foundation for this modern world. Here we have four-wheeled vehicles passing horse-drawn carriages on the streets, and the noise of heavy machinery overwhelms the soft murmur of the mill. The world will never be the same again. Philippe Sly and his accompanist, Michael McMahon, momentarily look away from their own points of reference and show great aesthetic sensitivity by transcending the distance between both worlds. In this century that suddenly became a brutal reality, this music provides a safe haven. It leaves the obvious mark of a dream full of romanticism and idealism at a time when humanity is at the crossroads and has just reached the point of no return.

Sly possesses a fine, velvet bass-baritone voice, clear diction and splendid, true intonation...In terms of his handling of dynamics, nuance of language and the poetry he brings to the long melodic lines of much of this music, I give full marks. Occasionally missing is a more pronounced sense of characterisation and more involvement in the text itself.