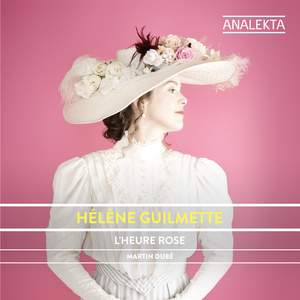 With her new album, l'HEURE ROSE, Hélène Guilmette, the soprano with a brilliant voice, gives new life to 10 female composers of the late 19th and the 20th centuries. In an era when men had complete control over artistic creativity, some women claimed their own right to be creative. Mostly forgotten, these women composers now step into the light, thanks to Guilmette’s new album on the ANALEKTA label. Twenty-three songs on various themes, some texts from their own pen, some by authors of the era. Hélène Guilmette and pianist Martin Dubé bring back to life, on this album, 10 of these musical pioneers through the exquisite pages they have created. L'HEURE ROSE is now!

Despite an era when the colour pink lacked receptivity, some of these ladies have distinguished themselves by joining, whether as singers, pianists, students or even as composers, the exclusive club of famous composers (Franck, Schumann, Brahms, Liszt, Chopin, Fauré, St-Saëns, Gounod, Massenet, Meyerbeer). However, history failed to remember their contribution to the musical repertoire. With her refined musicality, Hélène Guilmette gives us the works of some women with a tough background, exceptional ladies and works characterized by originality and vitality. "This debut album dedicated to women's music is the result of many years of difficult research. Because of the repertoire's vastness, and mostly because of the rarity of certain scores, every melody that was recovered becomes a real treasure," declares Hélène Guilmette.