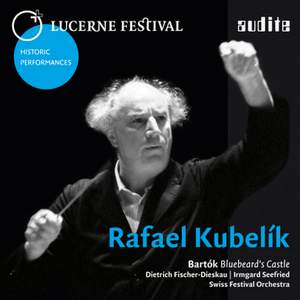 On the occasion of Rafael Kubelík’s 100th birthday, Audite presents this previously unreleased live recording of his memorable concert performance at the 1962 summer festival of Béla Bartók’s only opera, 'Bluebeard’s Castle'. With an infallible sense for Bartók’s orchestral riches and his musical drama of light colours, Kubelík reveals the emotional abysses of this gloomy psychological thriller and moulds the seven chambers symbolising Bluebeard’s innermost secrets with expressive psychological gestures. Soloists Irmgard Seefried and Dietrich Fischer-Dieskau, who also sang the role of Bluebeard in studio recordings with Ferenc Fricsay and Wolfgang Sawallisch, are two further regular guest performers of the festival. They convincingly interpret the inner tragedy of the unviable relationship between Judith and Bluebeard and the estrangement of the sexes. “Lucerne has managed to secure the best, the ideal interpreters for these roles”, the Neue Zürcher Zeitung commented. “Both singers admirably and thrillingly sustained the emotional high tension, intensifying it more and more.”

Only a few weeks after leaving his homeland in 1948 following the communist coup in Czechoslovakia, Rafael Kubelík appeared for the first time at the Internationale Musikfestwochen Luzern, today’s Lucerne Festival – and found a second home in this city. For nearly five decades Kubelík was one of the leading artists of the festival, as conductor and composer, giving conducting masterclasses and acting as artistic consultant. In 1967 he took Swiss citizenship and in 1968 he moved from Lucerne to nearby Kastanienbaum where he lived until his death in 1996. In cooperation with Audite, Lucerne Festival presents outstanding concert recordings of artists who have shaped the festival throughout its history. The aim of this CD edition is to rediscover treasures – most of which have not been released previously - from the first six decades of the festival, which was founded in 1938 with a special gala concert conducted by Arturo Toscanini. These recordings have been made available by the archives of SRF Swiss Radio and Television, which has broadcast the Lucerne concerts from the outset. Carefully re-mastered and supplemented with photos and materials from the Lucerne Festival archive, they represent a sonic history of the festival.

This release is furnished with a producer’s comment from Ludger Böckenhoff on www.audite.de/en/product/CD/95626/multimedia.

Fischer-Dieskau is on magnificent form. [Seefried’s singing] has devastating poignancy. The Swiss Festival Orchestra plays admirably. A version […] to be heard.

the extraordinary pairing of [Seefried with Dietrich Fischer-Dieskau], both totally immersed in their roles, ensures an interpretation like no other...Kubelík's restrained approach, probing the protagonists' psyches without resorting to melodrama, adds immeasurably to the creepy atmosphereabsolutely unforgettable.