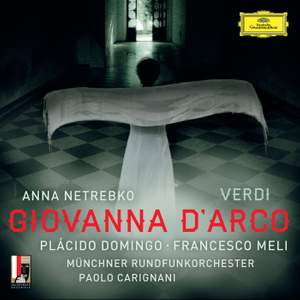 [Domingo] sounds entirely at home in his new vocal category; his voice now fibrous in quality, he is also engaged dramatically...Netrebko's soprano has expanded to embrace the stirring warrior-maiden... — BBC Music Magazine, September 2014, 4 out of 5 stars More…

"So che per via di triboli"

Full of melodies, passion and pathos, Giovanna d’Arco, Verdi’s take on the Joan of Arc story and its legendary heroine, is regarded as one of the great composer’s early masterpieces. The first complete audio opera recording of Domingo as a baritone and the first complete recording of this significant Verdi work in Deutsche Grammophon’s history.

Domingo is a marvel – “The King of Opera” (Die Presse). Widely hailed as the greatest Verdi tenor of his day, even as a baritone, with his distinctive “bronze” vocal timbre, musical intelligence and sense of poetry, he remains one of our most compelling Verdi interpreters.

[Domingo] sounds entirely at home in his new vocal category; his voice now fibrous in quality, he is also engaged dramatically...Netrebko's soprano has expanded to embrace the stirring warrior-maiden possibilities of the title-role...Meli's healthy and characteristically Italianate tenor creates a credibly wark but volatile Carlo...Carignani paces the score skilfully.

[Netrebko] In her entrance recitative and aria, her assertive manner, rich middle range and tonal amplitude immediately validate her as a warrior maiden and as an authentic Verdi soprano.

James Levine's classic recording with Caballé, Domingo & Milnes (1972) still takes some beating for Verdi's fanciful treatment of the 'Maid of Orleans', but I did warm to last year's maverick newcomer - Anna Netrebko offers more thrills than spills in the title-role and Francesco Meli sings with full-throated ardour as Carlo VII, whilst Giacomo is to my mind Placido Domingo's most successful baritone role to date.

Netrebko is on fire (no pun intended) as Giovanna, singing with her customary passion but also with more technical security in the role’s many florid passages and exposed top notes than she’s brought to other Verdi projects...Domingo is absolutely riveting as her father, a role which to my ear suits him far better than some of his other excursions into baritone territory.

[Netrebko] will be the deal breaker. This greatly talented but infuriatingly erratic Russian soprano runs true to form, being blowsily approximate and all over the place in the early scenes...before striking form in the second act, where she produces passages both thrilling and beautiful, graced by floated pianissimos to rival Caballé’s and underpinned by a wholehearted exuberance.