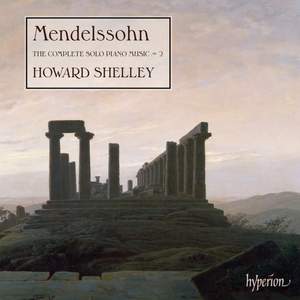 Time and again Shelley makes it clear that Mendelssohn has a special place in his affections, and although it is invidious to locate the finer moments in his unfailing expertise, certain performances... — Gramophone Magazine, September 2014 More…

Mendelssohn: Fantasia on "The Last Rose of Summer", Op. 15

No 1 in A minor. Andante con moto – Allegro vivace

No 2 in E minor. Scherzo: Presto

No 3 in E major. Andante

No 2 in B flat minor. Allegro di molto

No 4 in B minor. Agitato e con fuoco

No 5 in D major. Andante grazioso

No 4 in A major. Andante

No 5 in A minor. Agitato

No 6 in A flat major 'Duetto'. Andante

Howard Shelley is acclaimed as the living master of early Romantic piano music. So much of this music was ignored throughout the twentieth century that there is still a sense of discovery at each new recording. Shelley here presents the second instalment of a six-volume set of Mendelssohn’s complete solo piano music—perhaps the least well-known part of the composer’s repertoire. The first volume was praised for Shelley’s ‘immaculate, lightly-pedalled brilliance, unfailing stylistic assurance, warmth and flexibility’ (Gramophone).

This second volume includes the Rondo capriccioso, a favourite virtuoso concert piece of the nineteenth century; the three-movement Fantasia in F sharp minor, which was originally described as a ‘Sonate écossaise’, with its characteristic Scottish folk-song elements in the first movement, and two books of the Songs without Words.

Time and again Shelley makes it clear that Mendelssohn has a special place in his affections, and although it is invidious to locate the finer moments in his unfailing expertise, certain performances stand out for their exceptional grace and commitment.