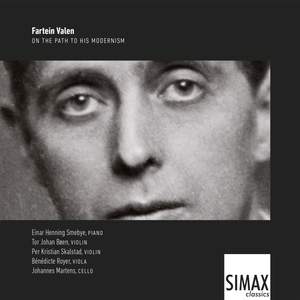 Fartein Valen: On the Path to His Modernism

Valen: Sonata for Violin and Piano, Op. 3; I Allegro espressivo

Valen: Trio for Piano, Violin and Cello, Op. 5; I Moderato

This CD presents three chamber works by one of the most significant Norwegian composers of the 20th century, Fartein Valen. Valen’s String Quartet opus 0, Violin Sonata opus 3, and Piano Trio opus 5 are performed by a group of musicians including the pianist Einar Henning Smebye, violinists Tor Johan Bøen and Per Kristian Skalstad, viola player Bénédicte Royer, and cellist Johannes Martens.

Fartein Valen was one of the great innovative musical figures of the first half of the 1900s.

He was born in Stavanger in 1887 to a deeply Christian family and maintained his religious beliefs all his life. It was the score of Valen’s String Quartet, Op. 0, composed when Valen was studying composition with Catharinus Elling in Christiania, that encouraged Director Max Bruch to take the young composer as a student at the Berlin Music Conservatory. The Violin Sonata and later the orchestral song Ave Maria confirmed Valen’s reputation as an important radical composer of the period. It was, however not until after the Second World War that his compositions began to gain greater recognition, both within Norway and outside. Legendary pianist Glenn Gould became a great admirer of Valen’s work and said at the recording of his Piano Sonata No. 2: “For the first time in many years I have found a looming personality in the 20th century's music”.

This recording documents the elegant transition of Valen’s music from classical romanticism to experimental modernism. It features renowned pianist Einar Henning Smebye and violinist Tor Johan Bøen performing at the head of a group of dedicated artists which also includes the viola player Bénédicte Royer, cellist Johannes Martens, and violinist Per Kristian Skalstad.