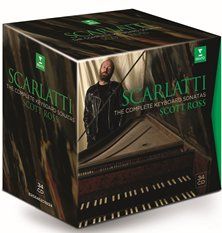 one of the most extraordinary achievements on disc in the last quarter-century...Wherever you dip into them, the sense of stylishness, energy and, especially, Ross's affection for Scarlatti's... — The Guardian, 19th June 2014, 5 out of 5 stars More…

Scott Ross’s award-winning complete Scarlatti keyboard sonatas, first released on Erato in 1988 stands as a landmark in recording history. This re-release marks 25 years since the death in June 1989 of the American-born harpsichordist, aged just 38.

In the 1980s, Ross became the first musician to record the complete keyboard sonatas – 555 in all – of Domenico Scarlatti (1685-1757). Though born in Pittsburgh, he moved with his mother to France in his early teens and attended the conservatories of Nice and Paris. After a 12-year stint as an academic in Quebec, he returned to France permanently in 1985 and made his home there.

To celebrate the 300th anniversary of Scarlatti’s birth in 1985, French radio asked Ross to perform the composer’s complete sonatas, for broadcast in a series of weekly programmes. He recorded two sonatas a day over a period of 15 months in 1984/85. Many had never been recorded before, even though a limited selection had featured in the repertoire of major pianists – including Horowitz, Michelangeli, Gieseking, Haskil and Gilels – for decades.

Most of the recordings were made – on four different harpsichords (Italian and French), to ensure a variety of timbre – at the Paris studios of Radio France, although the entire project was launched with the sessions for the Essercizi Kk. 1-30 at the Château d’Assas, near Montpellier in the south of France. The château played an important role in Ross’s life: he was first invited to play on the its harpsichord while still a student in Nice, and later on he lived in a house in its grounds.

Also an organist and pianist, Scott Ross lived a bohemian life and was something of a maverick – looking more like a rock musician than a scholarly harpsichordist. There was, however, no doubt of his credentials as a scrupulous and highly dedicated musician. He was also a passionate and brilliant performer, celebrated not just in Scarlatti, but in the music of Bach, Rameau and Couperin. When the Scarlatti sonatas were first released, the New York Times said: “Ross possesses all the necessary virtuoso flair and stylish sensitivity to bring this exciting music bounding to life.''

Domenico Scarlatti’s sonatas are colourful, intense and captivating one-movement works, which explore a variety of expressive worlds and technical possibilities. Each lasts just a few minutes and many reflect the musical influence of the Iberian peninsula (both Spain and Portugal), where the Neapolitan-born Scarlatti spent much of his life, notably as the music master of Maria Barbara, a Portuguese princess who later became Queen of Spain. In Madrid, towards the end of his life, Scarlatti became friendly with the legendary castrato Farinelli, who returned to Italy with copies of the manuscripts of the sonatas.

In 1988 Scott Ross received the Grand Prix du Disque for his complete Scarlatti sonatas from France’s prestigious and authoritative Académie Charles Cros, among many other awards. In 1988 he was named Musical Personality of the Year by the Syndicat des critiques français.

He had already been suffering from ill health when he was recording the sonatas, and he died of Aids-related causes in June 1989. As the BBC Music Magazine said, the complete edition was “a heroic achievement”, while in 1989 one of Gramophone’s critics called it the ‘Record of the Eighties’, describing it as “a fitting, self-erected monument” to Scott Ross. The harpsichordist claimed that his personal favourite among the sonatas was No 208, which he described as: “the most beautiful, even if it is also the slowest, and the happiest – it’s the sunniest of all of them.”

The 34 CD are presented in deluxe packaging, with a 20-page printed booklet; this is complemented by 200 pages of online documentation, including a commentary on each of the sonatas (along with the musical notation of its opening bars).

one of the most extraordinary achievements on disc in the last quarter-century...Wherever you dip into them, the sense of stylishness, energy and, especially, Ross's affection for Scarlatti's boundless harmonic and rhythmic imagination is obvious. It's a constant, almost inexhaustible joy.