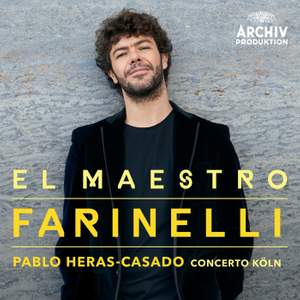 Pablo Heras-Casado makes his conducting debut performing instrumental and vocal music associated with Farinelli, the legendary 18th-century castrato who served as impresario and court musician to the kings of Spain.

This new album contains works by Baroque composers and features eight world premier recordings, including some arias sung by Bejun Mehta, “the best countertenor in the world” (Süddeutsche Zeitung)

As well as being a world class conductor, Heras-Casado prides himself on being fluent in Spanish, English, Italian & French.

the disc's highlight is countertenor Bejun Mehta's poignant and beautifully controlled reading of Porpora's aria 'Alto Giove' from Polifemo...Concerto Köln, under the dynamic baton of Pablo Heras-Casado, offers such taut and spirited playing that surely even the melancholic Philip would have cheered.

The disc feels bitty, the result, one suspects, of trying to tell too complex a tale in too little space...But the individual numbers are terrific, the conducting flamboyant and the playing punchy and suave.

Aside from the dance rhythms and castanets, found especially in pieces by José de Nebra, there’s another reason to tap the foot. It’s the conducting of the Granada-born Pablo Heras-Casado, now a fast-rising star. With him at the helm, the period instrument stalwarts of Concerto Köln have no chance of sounding podgy.

The disc’s selling-point is the Spanish inflection to the well-known idiom, as in a stampy fandango by Nebra and a jaunty dance by Francesco Corradini; there is a pleasing vivacity to everything, alongside Iberian rhythms and instrumentation...Heras-Casado clearly feels strongly about this stuff and gets punctilious performances from Concerto Köln.